Merson ,Batoni and the Pinta Picture. 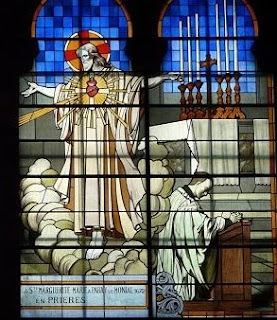 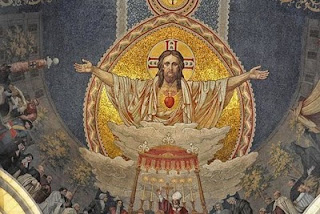 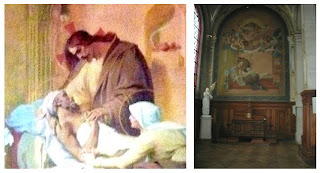 The picture by Henri (Ludovic Marius) Pinta (1856-1944) is obviously an important image for this project. It is the image which Teilhard treasured above all others. Pinta’s image for him embodied his whole philosophy and theology. So we have to look at this more carefully than just another holy picture. For Teilhard this is THE holy picture. It might help to make more sense of this image if we go back to the Merson image of Christ in Majesty. Pinta was a well-known and respected artist specialising in religious art. According to my research he did two important pieces for the Basilica in Marseille. The first was 12 stained glass window depicting the history of the Sacred Heart (1920-30). The other is a big mosaic,(1933-1941) like Merson’s, but unlike Merson’s it is quickly identifiable as of the Batoni type. What is interesting is that the Marseille clearly did NOT want to imitate the Merson mosaic: that must have been a little too radical for their taste, instead they chose pretty conventional images. Pinta also undertook a Sacred Heart window at the church of the Sacred Heart, Liverpool. I will try and find out about this one. So it appears that the picture that Teilhard loved so much was something of a one off. Well perhaps not. If we look at his picture showing Jesus at the death of St Joseph which he painted for the Church of Saint-François-Xavier, Paris in 1915 we see a image of Jesus which is more like the Teilhard picture. Pinta does capture a sense of the compassionate nature of Jesus in his 1915 painting of the death of Joseph and this comes through in the picture treasured by Teilhard. I personally find it a very appealing picture, and it surprises me that he was not asked to do something like it again. Perhaps he did? But then again, the picture is quite a departure from the standard images so it might not have been that popular. Certainly of the lack of prints and holy pictures available today suggest that it was not an image which appealed to Catholics brought up on the kind of Batoni images – or the disembodied heart images.

Pinta’s Christ first of all is not wearing much by way of clothes. To me it looks as if he is just wrapped in a cloth. His chest is completely bare. He has not dressed up for the occasion, like in the Batoni types. I think this is Christ in the process of a TRANSFIGURING resurrection. Light is radiating from his heart, and the wounds in his hands show beams of light, not red blood. His Jesus is all about light, and not blood. His head is not posed or at an angle, he looks at us squarely and compassionately. But for those used to the Botoni image , with a Jesus all rouged-up and all nicely dressed, the Pinta must have been viewed as rather vulgar. ( I read that others of his religious works were also accused of being vulgar. ) Would this have been rather shocking in comparison with the Batoni or Merson, and the kind of holy pictures that were popular at the time? The answer has to be yes. This is quite unconventional: and Teilhard adored it. I think I understand why. It has none of the baroque sentimentalism of the Batoni, and unlike the Merson, this is a picture of compassion and not power. Pinta’s Jesus is totally open and totally vulnerable and full of light. This is the Christ of the transfiguration. And , when we look at icons of the transfiguration I see a remarkable similarity between these and Ian’s early drawings for the Sacred Heart icon. Ian: is Teilhard’s Sacred Heart as revealed in the Pinta image a kind of 'Transfiguration' of the Sacred Heart? I think that you actually got to this point quite early on, and having reflected on Teilhard’s Sacred Heart, it is more than apparent that what appealed to him was the divinity of Christ bursting out of his human body. His heart, the divine centre: the golden glow.
Posted by DWP at 17:08