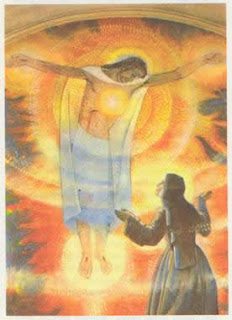 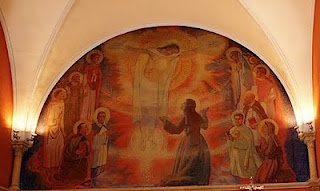 What is that line from Daphne du Mauriers’s Rebecca? : ‘Last night I dreamt I went to Manderley again..’ Well, last night I dreamt I went to Paray .. for the first time! It had been a long day: had tutorials from 9.00 and then a two hour postgrad workshop on the mysteries of cost benefit analysis; then in the afternoon, three hours straight on ‘ does evidence drive policy or does policy drive evidence? All followed by a horrendous commute home! As I sat there squashed between a very large gentleman playing with his mobile phone and several other large people all hooked up to their ipods or whatever I reflected on the irony of the fact that one of the case studies I had used in the morning lecture was on public policy in relation to obesity. Talk about taking one’s work home with you. And then I closed my eyes and dreamt of Paray-le Monial. Well, perhaps day-dreamed is more accurate. I have a little booklet on Paray published by the CTS and the cover came to mind as I sat there surrounded by ‘the growing obesity problem in the UK’. I just thought it would be so nice to be walking along the river Bourbince in the depths of Burgundy rather than compressed by the sheer weight and mass of my fellow humans in Farringdon! I suppose mentally I had spent too much time in Paris, and the logical next stage was to travel to where the modern devotion to the Sacred Heart began, the small town of Paray-le-Monial. So, I closed my eyes and travelled south. Why Paray? I think that as I reflected on what Ian had said about the Sacre Coeur mosaic made me focus on modern or twentieth century images: what else was there? I had been mulling this over in my mind - in between thinking about problems of devising metrics for essentially non-quantifiable variables (Yes, that is what I do!) - and by the time I was getting squashed in Farringdon my brain finally came up with: next stop, ‘Paray-le-Monial’.


Today is Ash Wednesday, and so went to mass and was duly reminded about my ultimate fate. I wrote the paragraph above, and then on my return home I set to work investigaing the fresco which takes centre stage in the apse of the Chapel of the Visitation. I think I sent Ian a copy of this early on in our discussions. The chapel is where St. Mary Margaret had her experiences of the Sacred Heart between 1673 and 1675. This chapel may not as famous as the basilica in Paris, but they are connected in a very profound way. The Sacre Coeur in Paris is built in direct response to what happened in this small unassuming place in Paray-le Monial. As images they have little in common: except that they both strike out in a different direction to the standard popular image. The Paray fresco, like the Merson mosaic it is also located in the apse of the building. And, like the Merson, the Paray fresco shows Christ with his arms outstretched. But, significantly this is Christ not in majesty, but crucified. However, like the mosaic the artist of the fresco chooses to emphasize light and literally waves of energy pulsing from the golden glow that is his heart.


The mural is by an artist called Luc Barbier and it was completed in 1966. As I was day dreaming about the pilgrimage we intend to make to Paray this summer (God willing) last night, it is strange that this afternoon I find that according to one source, which I have yet to verify, the mural was actually inspired by Teilhard’s ideas on the Sacred Heart! Whatever the truth of this, it is clear to me that in thinking about the image, and the devotion as a whole I now have a kind of triangle of images which inform one another. In social science we talk a lot about the importance of ‘triangulating’ data. So, in a sense, I think I have a triangulation to reflect upon. The Roman (Botoni) image; the Paris (Merson) mosaic and the Paray (Barbier) fresco. These seem to represent three different ‘stages’ in the evolution of the image, but also perhaps of the devotion itself. Some thinking and praying to do. I feel even more convinced now , more than ever, that it is only in the ICON, can we begin to capture what Teilhard is saying. That the Paray fresco appears to have been inspired by Teilhard fills me with confidence that the icon will be accepted as a wholly Catholic work. If Teilhard was good enough for Paray, it should be good enough to inspire and re-new the devotion to the Sacred Heart. Well, that is my hope. But for now, I have to find out more about Luc Barbier. AND....

FOR AN EXCELLENT PHOTO of the APSE GO HERE
.
Posted by DWP at 14:55