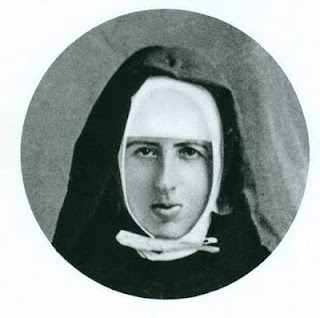 Françoise Teilhard de Chardin 1879-1911
It is appropriate to begin our June exploration of prayers to the Sacred Heart with Teilhard’s own family. His mother, Berthe-Adele and his sisters Marguerite-Marie and Françoise were devoted to the Sacred Heart – as was his cousin, Marguerite Teillard-Chambon. Françoise penned a prayer which I am sure he would have said often in her memory. And this is my ‘prayer for today’. It captures the intensity of the devotion which his mother must have inspired. And today I join with them in this prayer.


Heart of Jesus, give me a heart that is filled with ardor and generosity, that thrills with joy when sacrifices have to be made; a heart whose zeal knows neither fatigue nor obstacles; a heart whose only love is your heart, and whose only knowledge is your name.
Françoise Teilhard de Chardin

Françoise was Superior of the Convent of the Little Sisters of the Poor in Shanghai China. She died there of smallpox in 1911.

In a letter to his parents in June of that year, Teilhard writes:

Our greatest consolation, surely, is that it is difficult to imagine a holier or more beautiful end…Our Lord is giving her her reward before its time has come.: we have no right, even, to regret the good she would have done had her life been longer. The fine life is the life that fulfils God’s plans.
See Mortier and Aboux (eds) Teilhard de Chardin Album, Collins, London 1966. P 42

To cheer Françoise up when she was sad, Teilhard would tell her that she was ‘looking at the crucifix from the wrong side’. ( cited in Lukas and Lukas, Teilhard, Collins, 1977, p 242)

When we experience the inevitable pains and sadnesses of life, it is well to remember Teilhard’s advice to his dear sister.
Posted by DWP at 13:06