Well more work on the drawing this morning, then this afternoon it was back to my mum's garden shed to sand the boards... interestingly I also have a commission for Our Lady of Perpetual Succor (whose feast happens to be this month as well) and one of the Mother of the Church, which is by popular acclaim now simply Our Lady of the Wall... which I originally painted on the Israeli seperation wall in Bethlehem. This one is to be a gift from some sisters to the Pope, which is a great honour and highly appropriate given that it was his orginal talk to the extraordinary Synod of Middle Eastern bishops that was its inspiration. (For those of you interested you can see an extended presentation of this icon in this video, at just after the half-way point http://www.netforgod.tv/dll.php?c=7pjeq172d1yta )

I don't know what is wrong with my computer, but it keeps posting and loosing half of what I have written! Once again I had written a lot of explanation, only to find it has vanished. Really so annoying. And now it has done it again!!! It seems that the reflections shouldn't be posted... sorry David for that. However, some close up photos of what I have been developing in the bottom area in particular...

Using inspiration from some illuminated manuscripts, I have woven a vine with its leaves and grapes around the lower half, which speaks of the Eucharist, and the New Creation which bursts into life. To the left there are fantastical animals, while to the left fantastical fish, and in the upper regions there will be birds and stars, thus depicting the whole of the created order orientated to Christ. In the left bottom corner there is Adam, symbol of all humanity, and to the right St Mary Magdalene. Why Mary? Because she was at the Cross and met Christ risen in the Garden, because she 'desired the One thing necessary' and because forgiven much she loved much, thus in these ways she witnessed, responded to and experienced the Sacred Heart redeeming her and desiring her.To right and left of Christ we have the traditional deisis of the Mother of God and St John Baptist. 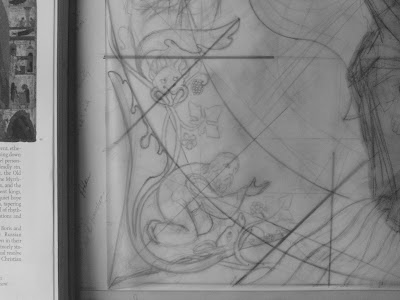 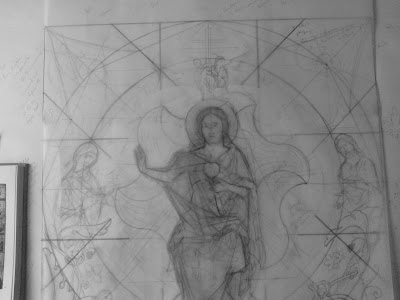 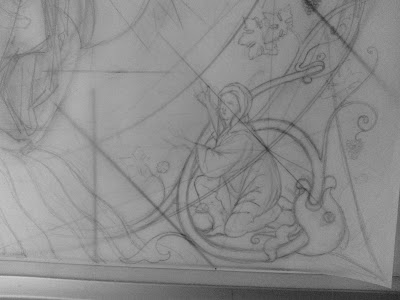