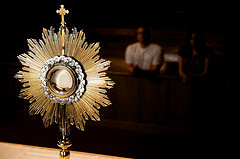 As I am discovering, the process of writing an icon is a profoundly spiritual journey for the iconographer. But it seems to me that it is also a deeply spiritual experience for one who commissions an icon. And I was not expecting that, but it is clearly the case that the focus on an image - in this case the Sacred Heart – does not as some might think lead to ‘worshipping’ an image or idol, but exactly the opposite. An icon leads to a contemplation of that which cannot be imagined or captured by human artifice. The iconographic experience as I see it now, is a way of contemplating the profound truths which are contained in Christian theology - and especially that of Orthodox and Catholic theology. Contemplating the idea of the Sacred Heart in iconic terms has time after time returned me back to the Sacraments and the teachings of the Church. At the same time – and much to my surprise – contemplating the image of the Sacred Heart and praying to the Sacred Heart in the context of Teilhard de Chardin has not served to take me off into some New Age la la land, but again , quite the opposite: it has led me to rediscovery of what we might term ‘traditional’ Catholicism. An instance of this was this morning. Over the past few months, I have been re-discovering the power of the most ‘traditional’ of Catholic practices: the adoration of the Blessed Sacrament. I thought I would use the adoration today to pray for Ian’s work.

Several non-Catholic friends over the years have said that they were not too keen on Catholicism because ‘too much is going on’. Well, we leave that to one side. But in the adoration of the Blessed Sacrament next to nothing is going on. Nothing is ‘going on’ but actually everything is going on. The presence of the Blessed Sacrament exposed in the monstrance is such a (can’ t think of the word, so I will just say ) powerful focus for prayer. No words are being uttered. People just quietly and humbly adore. Adore, that is an important word. People pray by adoring the body of Christ present in the host contained in the monstrance. Adore: to love wholly and completely and with the whole of your heart.

Robert Faircy recounts that Teilhard’s accounts of his experiences of the Sacred Heart in ‘Three stories in the style of Benson’ are, according to one of Teilhard’s oldest and closest companions, ‘true religious experiences of his own’. (Faircy, All things in Christ, p 29) So I think we may read these stories as rather more than just stories about a friend. As I prayed today Teilhard’s account of an experience during an adoration of the Blessed Sacrament ( written in 1916) came to the forefront of my mind. It is an account which has to be read in the context of the experience recounted whilst looking at a picture of the Sacred Heart. You can read them here: go to Chapter 2, page 16.

..my experience assumed proportions which no physical analogy could express.
‘I had then the impression as I gazed at the host that its surface was gradually spreading out like a spot of oil but of course much more swiftly and luminously. At the beginning it seemed to me that I alone had noticed any change, and that it was taking place without awakening any desire or encountering any obstacle. But little by little, as the white orb grew and grew in space till it seemed to be drawing quite close to me, I heard a subdued sound, an immeasurable murmur, as when the rising tide extends its silver waves over the world of the algae which tremble and dilate at its approach, or when the burning heather crackles as fire spreads over the heath.
‘Thus in the midst of a great sigh suggestive both of an awakening and of a plaint the flow of whiteness enveloped me, passed beyond me, overran everything. At the same time everything, though drowned in this whiteness, preserved its own proper shape, its own autonomous movement; for the whiteness did not efface the features or change the nature of anything, but penetrated objects at the core of their being, at a level more profound even than their own life. It was as though a milky brightness were illuminating the universe from within, and everything were fashioned of the
same kind of translucent flesh….‘So, through the mysterious expansion of the host the whole world had become incandescent, had itself become like a single giant host. One would have said that, under the influence of this inner light which penetrated it, its fibres were stretched to breaking-point and all the energies within them were strained to the utmost. And I was thinking that already in this opening-out of its activity the cosmos had attained its plenitude when I became aware that a much more fundamental process was going on within it….. ‘I heard then the Ave verum being sung.‘ The white host was enclosed once again in the golden monstrance; around it candles were burning, stabbing the darkness, and here and there the sanctuary lamps threw out their crimson glow.’


I believe these were indeed accounts of Teilhard’s actual experiences of the Eucharist – and the Sacred Heart. We only have to read his essay ‘Le Pretre’ - ‘The Priest’ – written a few years later ( in 1918) to get a sense of what Teilhard experienced in the Eucharist. And from this work’ The Priest ‘ we have today’s prayer.


I kneel, Lord, before the universe that has imperceptibly, under the influence of the host, become your adorable body and your divine blood.
I prostrate myself in its presence, or better – much better - I recollect myself in that universe.
The world is filled by you!
O universal Christ, true foundation of the world, you who find your consummation in the fulfilment of all that your power has raised up from nothingness, I worship you, I am lost in the consciousness of your plenitude permeating all things.
( in The Prayer of the Universe, Fontana,1973: 161


And we can only pray that the Church may be renewed and strengthened through the adoration of the Blessed Sacrament.

( The image above is taken from the web page of the 'Mission of Spirit and Truth' based in St. Louis. A really inspiring example of how to make the Eucharist more relevant to young people : see HERE) Do we have anything like this in London? I don't know...but we should.
Posted by DWP at 15:53