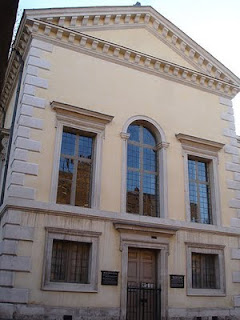 The Queen's chapel, London. The place where St Claude de la Colombiere first brought the devotion to the Sacred Heart to Britain in 1676.

London - city of the Sacred Heart!

The fact that London is home to the mother house of the Congregation of Adorers of the Sacred Heart of Jesus (SEE HERE ) means that it is rather special. In this city we are blessed to have a community that is wholly dedicated to a perpetual adoration of the Sacred Heart in the Blessed Sacrament. London is truly a city of the Sacred Heart! But London has another important connection to the Sacred Heart; the time spent here by St Claude de la Colombiere. St Claude was the Jesuit priest who, more than any other, championed the cause of St Margaret Mary after he became her spiritual director in 1674. Two years later - in 1676 - he was sent to London to become the preacher to the then Mary of Modena, wife of the Duke of York who was later to become Queen Mary II when her husband ascended to the throne as James II in 1685. This was a brief reign, coming to an end in 1689 after Mary produced a Catholic heir to the throne! James fled to France and was duly replaced by a more acceptable protestant who became William III ( this is known as the ‘Glorious Revolution.’)

What is most significant – and is, I think, sufficient in itself for London to be called a city of the Sacred Heart - is that whilst in London St Claude was to practice and preach the devotion to the Sacred Heart, and furthermore share this devotion with Mary - the then Dutchess of York. Now this was at a time when it was dangerous to be a Catholic and minister to Catholics in London. In 1678 St Claude was accused of being part of a Catholic plot ( the so called Titus Oates plot – which proved to be a complete invention and fiction!). Poor Claude was arrested and thrown into jail. It was only his association with Mary which may have saved him from Tyburn : otherwise his name might have been recorded on the list of martyrs at Tyburn convent. He spent three weeks in prison and returned to France a very sick man. He never really recovered his health again and died in 1682.

Mary was the first person of (Royal) note to petition the Holy See to recognize the devotion with a feast. ( This eventually happened in 1852. ) When we reflect upon these facts it is really quite amazing. The man who was most responsible for championing the visions of St. Margaret Mary and who was her spiritual director spent a few years spreading the devotion to the Sacred Heart in St James’s palace and to the beleaguered Catholic community of London whilst at the same time guiding St Margaret Mary by letter! So in many ways St James’s palace may, with some justification, be said to be the first place outside Paray-le-Monial where public devotion to the Sacred Heart occurred – and in the lifetime of St Margaret Mary. St Claude ministered to Mary in the Queen’s Chapel ( photo above left) which had been built for the Catholic wife of Charles I - Henrietta Maria. After Mary II it no longer functioned as a Catholic place of worship.

It is about time that this Chapel is recognized for its significance in the history of the devotion to the Sacred Heart.

Dear St Claude, who once suffered in a prison in London, pray for the City that in your day persecuted Catholics. Pray that we may once again hear the words you preached in this city so that we may open our hearts to the divine love radiating from the Sacred Heart of Jesus.
Posted by DWP at 13:53