June Prayer to the Sacred Heart (6): The cosmic Christ 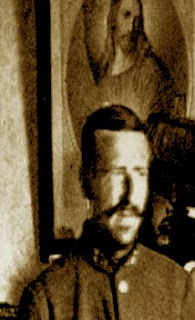 It is in the Sacred Heart that the conjunction of the Divine and the cosmic takes place..There lies the power that, from the beginning, has attracted me and conquered me… All the later development of my interior life has been nothing other than the evolution of that seed. 1919 (cited in R. Faricy, All Things in Christ, Fontana, 1971; pp13-14)

So , our prayer for today is part of an early prayer by Teilhard which encapsulates his mission to renew the Sacred Heart’s position in the life of the Church. It is to be found at the end of his first great statement of his ideas, ‘Cosmic Life’, completed in Easter 1916 in Dunkirk.


Let us pray:
Lord Jesus Christ, you truly contain within your gentleness, within your humanity, all the unyielding immensity and grandeur of the world. ... I love you as the source, the activating and life-giving ambience, the term and consummation, of the world, even of the natural world, and of its process of becoming.
You the Centre at which all things meet and which stretches out over all things so as to draw them back into itself: I love you for the extensions of your body and so to the farthest corners of creation through grace through life, and through matter.
Lord Jesus, you who are as gentle as the human heart as fiery as the forces of nature, as intimate as life itself you in whom I can melt away and with whom I must have mastery and freedom: I love you as a world, as this world which has captivated my heart ; — and it is you, now realize, that my brother-men, even those who do not believe, sense and seek throughout the magic immensities of the cosmos.
Lord Jesus, you are the centre towards which all things are moving: if it be possible, make a place for us all in the company of those elect and holy ones whom your loving care has liberated one by one from the chaos of our present existence and who now are being slowly incorporated into you in the unity of the new earth.
The Prayer of The Universe, Fontana, 1973; 103-4


Today we pray that this ‘seed’ of the Sacred Heart - as the cosmic Christ - will grow in our heart’s poor soil and attract and unite with our heart.
Posted by DWP at 15:47