June prayers to the Sacred Heart (5): A prayer from St. John Eudes 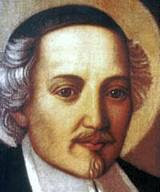 This exploration of the Sacred Heart by reflecting on its artistic representation is like following a river to find its source only to discover that you are back where you started. For the more does one explore the image, the deeper we are pulled into prayer. It is as if we can only really find the source of the river by swimming in it. And then the source becomes more apparent: the Sacred Heart flows out of the very depths of the human experience of the self and the divine. And thus our journey to the Sacred Heart begins and returns again and again to the Holy Eucharist.

As we explore the Sacred Heart in prayer we realize that it calls and pulls us towards the very core of existence: what Teilhard called the ‘heart of matter’, the heart of the universe , and the heart of the divine and the heart of ourselves. In short, reflecting on the Sacred Heart and prayer to the Sacred Heart is powerful stuff. Teilhard believed passionately that it held the key to the ‘Christ of today’, as he expressed it to Jeanne Mortier. The Christianity of the future had to spread the good news of the Sacred Heart as ‘ the centre of energy that creates and drives the world’ ( Mortier, Album, p193). For this reason he was worried that the devotion that was practiced in his own time would fail to bring about this sense of the ‘cosmic’ scale of Christ. In his letter to his cousin who was about to go off to Paray le Monial in 1917, he is highly critically of the ‘mawkish’ images full of ‘false sentimentality’ and ‘excesses of false devotion’. Teilhard’s preference is for the Sacred Heart to become the ‘centre of an almost esoteric cult reserved for those who wish with all their hearts to be real Christians through and through’. (Making of a Mind, p192) In other words, the Sacred Heart was so deep and complex and powerful a mystery that it is wholly unsuited to be a popular – mass market - devotion fuelled by industrially produced cheap sentimental kitsch images. But, as he admits ‘ the mistake may be mine’. Was the mistake all his? I don’t think so. If the power of the Sacred Heart is to be harnessed by the Church it may be that it is a good thing that the devotion has suffered a decline or (to use a word favoured by Teilhard) diminishment. For Teilhard the dominant image was (As he notes later in The Heart of Matter ) ‘oddly limited both in the object to which it was directed (Reparations ) and in its symbol ( the heart of our Saviour, depicted with curious anatomical realism!). Thus a few years before his death he observes:

The remains of this narrow view can still, unfortunately, be seen today, both in a form of worship which is always obsessed by the idea of sin and in an iconography which we must needs deplore without too much vexation. For my own part, however, I can say that at no time has its influence held the least attraction for my piety. (Heart of Matter, 43)

The iconography of the Sacred Heart, in my experience to date, does get in the way of prayer. It has not been much help for me on this journey. But, like, Teilhard, that just might be to do with me: I may be wrong. Thus my exploration of the Sacred Heart has essentially involved prayer which is focused by words rather images. Where images have aided prayer they have - like the icons of the Virgin, and Pinta’s picture - helped me to focus on the heart of Jesus. I have also found that icons of the Annunciation, Transfiguration, Resurrection , Ascension and Pentecost can be powerfully evocative of the Sacred Heart. And, of course the Rosary is also indispensible for anyone on a journey to the Sacred Heart. But the Batoni type pictures , no. I have tried, but no they are not a great help. Where they do work is through a quick look and then close your eyes and imagine the image just morphing into something else - as Teilhard did. In this respect, I think that the simple drawing by St Margaret Mary has been far more effective as an aid to prayer: a kind of map to use on the journey. My reading of the history of the devotion suggests that, in this respect, I am more in tune with the devotion as it was prior to the age of kitsch ‘anatomical realism’.
Thus the prayer for today comes from St John Eudes. Many of his prayers are remarkably vivid and - for me - really capture Teilhard’s sense of the Sacred Heart and the sense of the cosmic Christ. His prayers can be immensely visual and seem to have the effect of inducing a clear mental picture. As in this prayer.

O furnace infinitely to be desired! Who will grant me to be plunged into that burning fire?
O Mother of Jesus, O all you angels and holy saints of Jesus, I give myself to you and to each in particular, and I give you also all my brothers and sisters in Christ, and all the inhabitants of earth, that you may cast us all into the abyss of that sacred furnace!

Attend and hear, O vast furnace of love!
A tiny straw asks most humbly and earnestly to be plunged, buried , lost, devoured and consumed wholly in your sacred flames and your holy fires forever and ever!

O fire which ever burns and is never extinguished.
O love which is ever fervent and never grows tepid, inflame me wholly that I may love you wholly.