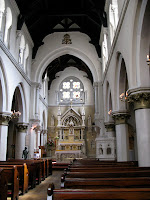 Readers of this blog must have observed that it is all rather convoluted: it wanders all over the place and turns back on itself, and goes off in another seemingly unrelated direction.  I was happy to allow my search for the Sacred Heart to lead where-ever it was minded  - or guided - to go.  I think that is what putting all ones trust in the Sacred Heart involves.  It began as a journey of exploration of an idea through an  image, which took me to commissioning this beautiful icon from Elias Icons and has since  July 2011 involved ‘reading’ the icon and allowing it to do its work (as Ian expressed it).   The most recent reading has involved reflecting on the Sacred Heart through the Dominican tradition.  With this in mind I paid another visit - this time with my wife - to Corpus Christi church - near Covent Garden in London-  ( see HERE) to think a little more about the relationship between (amongst other things) the Sacred Heart and the Body of Christ - which the church emphasises by a statue of the Sacred Heart as you enter and a chapel to the Sacred Heart.


The window in Corpus Christi serves to remind us of the  centrality of the Eucharist for the future of Christianity, and not just to prompt us to reflect on its place in the Church in the past.    In the Eucharist we encounter the real presence of Christ in the bread and wine: and that it what the feast of Corpus Christi celebrates.

The two figures on the top represent St Thomas Acquinas (left) and St. Bonaventure (right): both of whom are closely associated with Corpus Christi. They were both invited by Urban IV (1264) to write a hymn to be used in the celebration and devotion to the body of Christ.  Acquinas read his out, and when it came to St Bonaventure’s turn, the Seraphic doctor tore his own effort up, saying that Acquinas’s words were far superior to his own.  And so it is that Pange Lingua by St Acquinas is still used today: but it is nice that the window also asks us to reflect on the humility of St Bonaventure.  We remember 'Dr. Seraphicus' not for what he wrote, but for his humility and meekness of heart  he showed in  acknowledging the gifts of Acquinas.  And appropriately, underneath  St. Bonaventure we see  ( leastways I think that we see) the ‘seraphic’ St Clare of Assisi who is shown holding up the Blessed Sacrament in a ciborium. This recalls the episode  in 1234, when the army of Frederick II scaled the walls of San Damiano at night. Clare took  the ciborium from the chapel adjoining her cell and bravely faced the invaders by raising the Blessed Sacrament on high.  Dazzled by the Blessed Sacrament  the soldiers fled. Next to her is Saint Juliana of Liege ( or Mount Cornillon) (1193–1252).  She had only been canonized in 1869 by Pius IX  just a few years before  Corpus Christi church was built.  Like St Clare, she is also often represented holding a monstrance.  But I think St Juliana is directly underneath St Acquinas, as the other figure appears to be dressed in the habit of the 'poor Clares'.   St. Juliana has an important  role in the history of Eucharistic devotion through her vision she had of the Church – as represented by the moon having a dark spot to signify the absence of a special feast to the devotion of the body of Christ in the Eucharist.  This is shown in the centre of the widow.  St Juliana had an intense devotion to the Eucharist and was a great advocate for instituting a feast for the Sacred Heart in Liege (1246) and later in 1264 Urban IV – a former archbishop of Liege – instituted it for the whole church. (Hence the hymn writing competition.) In 1312 it was conformed as general feast of the Church

Thus the window provides a fascinating aid to meditating on the centrality of the Eucharist – as the body of Christ - in the life of the Church.   Given this, it is wonderful to think that Fr. Francis Stanfield must have been inspired by the devotion of these saints - and especially by the hymns of St Thomas Acquinas ( Pange Lingua and Adoro te Devote) to compose O Sacred Heart and Sweet Sacrament Divine which so beautifully express what this church located in the very heart of London is really  all about.

Evenso, as I left the church last Saturday to join the masses of tourists and other travellers  from all over the world in the streets outside - some of whom had come in and prayed and lit a candle - it was the image of St. Acquinas and that moon which made me realise I had to re-read Acquinas if I was to make any further progress on my journey of reading this icon.  I had the feeling I was missing something.