David Richo's The Sacred Heart of the World (1) 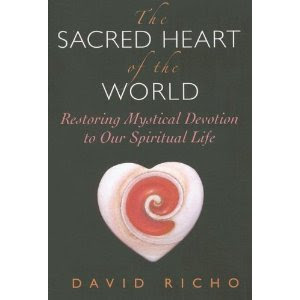 When I first decided to rediscover the Sacred Heart through the commissioning of an icon, I determined that it should be a journey which was not constrained, but flowed  and allowed the icon to do its work.  Actually that is not quite true, because initially I was all very instrumental and academic about it - and thankfully Ian put me right as soon as we began to think about the project.  At that point in the journey I realized that the way forward was not to read all that I could about the Sacred Heart, but let the meaning of the Heart of Jesus unfold in its own way.   That said, I did find that some books have been useful - like guide books on a journey.   One such guide books which I have found absolutely invaluable as a source of inspiration and reflection is David Richo's The Sacred Heart  of the World:  Restoring Mystical Devotion to Our Spiritual Life.  ** (See HERE )  David was kind enough a while ago to write and tell me that he was following the blog, and thus I think it is about time I explored the book in a more deliberate way.  So, this is the first of a series of blogs on the book.

Having spent some time rediscovering the Sacred Heart I think it is now is about the right time to reflect a little on the journey others have taken.  At one stage I described the the process of reading and writing an icon was rather like a pilgrimage.  And I think that is an appropriate way to think about it.  In Chaucer's Canterbury Tales the pilgrims tell each other stories.  I have never been on a real pilgrimage myself - who knows one day, but I know from what people tell me who have done so is that meeting and sharing stories with fellow pilgrims is an important part of the whole experience.  So, I suppose here I can compare notes as it were with another pilgrim intent on 'restoring mystical devotion'  by means of the Sacred Heart.

Let us start at the very beginning, which is, as Sister Maria reminds us, is ' a very good place to start'.   I seem to recall that human beings are prone to what psychologists call 'inattentional blindness'  : we see but we don't see. We are so busy looking for something that we don't  realize that  we have actually seen something else.  It was only ( a few days ago)  when I picked up  Dr. Richo's book to read  in a more focused way  -  that is to read it from cover to cover -  that I actually noticed the quote of the first page  from  Blessed John XXIII. 'Now I think of myself as living solely for the Sacred Heart'.  I was rather amazed and shocked that I had not spotted this quote before.  Why? I  don't know, must ask one of my psychology colleagues!  I have, since a child,  always felt very close to John XXIII.  Indeed, when I went to up to university I took a whole pile of economic and political science textbooks, and yes, a copy his  Journal of A Soul.  Thus I had only just opened David's book  the other day when I had to close it again and look for my copy Journal of A Soul!   Re-reading a book which I had read constantly as a student I was so surprised that I had not taken notice of the extent to which the Sacred Heart was so central to John XXIII.  How on earth did I not get that? At the same time as I was reading Journal of a Soul I was also deeply influenced by Teilhard: and yet I did not get how important the Sacred Heart was to him, either.  So the extent of my 'inattentional blindness' in respect of the Sacred Heart was rather disturbing - and  so it was with a sense of shock I returned to David Richo's book.   It begins with his account of a personal experience in the woods of Mount Subasio near Assisi. Which made me think that the young man who had been so completely blind to the Sacred Heart  - even when it was shouting out of the page of closely read books - was only ready to answer the 'who am I  question?' when I was truly open : when my heart and not just my head was open.

Richo opens by explaining how the idea of the heart and the spirituality of the heart is common to so many of the great spiritual traditions: it is not exclusive to Christianity.   He notes that:

'The Sacred Heart is God's zeal for communion with the human world..[and that] the revelations of the Sacred Heart tell of a God who is no longer distant but who has come close, as close as our very  own 'within' ...Thus a devotion to the Sacred Heart  is a fully and richly mystical, experience.  It liberates us from dualism, God out there and we down here, and gives us  a unity that is abiding and that powerfully endures  within time and beyond it'. (p3)

Ah, that was it.  I was never really about 'mystical experiences' : for me religion was about faith and reason. 'Mystical devotion' was not my game.  Hence, I could never trouble myself to get past the sentimentalism and kitchness of those pictures and statutes: for they represented the kind of Catholicism that I believed was irrelevant to the modern world.   And yet, of course, a spiritual life without a mystical dimension is a rather shallow sort of spiritual life.  Indeed, I confess that my own spiritual life   was rather shallow without  this sense of the role of 'mystical devotion'. What Richo does in the first few pages is make the case for a restoration of the Sacred Heart  as a powerful point of entry - indeed the most powerful  point of entry - into a deeper  spiritual life.  But first we really do have to get past the saccharine  images which so many of us find does nothing for us - apart from turn us off.  It turned me off to the point where I actually could not see it: as far as the Sacred Heart was concerned I was truly  blind, and deaf!  Unlike David Richo, therefore, the Sacred Heart did not speak to me, or leastways, I was not listening.  But eventually I got it: not as a result of an intellectual process, but as a result of getting to a point in my life when I was finally meek and humbled enough to be open to God's grace. So, reading  The Sacred Heart of the World I feel rather like the workman who turns up very late  in the day, does five minutes labour and still gets paid for a full day.   David has spent 50 years listening to and puzzling over the Sacred Heart, and then finally figured out what to do.  This Johnny come lately David, on the other hand,  has spent a long time actively not listening and not troubling himself with the Sacred Heart, but here I am wrestling away - and sharing his passion for devotion which, I now more and more believe, is central to the Christianity of the future and to the spiritual evolution of mankind.

====
**"The Sacred Heart of the World" renews our devotion to the Sacred Heart by attending to its scriptural and mystical origins, and expanding our spirituality to embrace universal compassion. It is the first book to tackle the issue of devotedness to the Heart of Jesus that is intelligible and appealing to people of the twenty-first century. Based on a combination of extensive research and the author's own personal devotion to the Sacred Heart - a lost treasure from our Catholic past - and his interest in mysticism, "The Sacred Heart of the World" unlocks a new future of vibrant and conscious faith. The book has a threefold purpose: to inspire devotion to the Sacred Heart, to rekindle spiritual devotion, and to center the Sacred Heart into the new cosmological realizations that will appeal both to Catholics and people from a variety of religious traditions. The book explores the symbolism of the heart in world religious traditions, and then traces the historical thread of the devotion into modern times. It draws significant links to the philosophy and theology of Teilhard de Chardin and Karl Rahner and their links with Ignatian spirituality.'