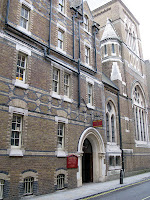 Corpus Christi in London is a church I have always meant to visit, but some-how over the years I have never got around to it, until today. And I was so glad I did finally pay a visit.  In terms of the devotion to the Sacred Heart I think it can rightly be considered to be one of the most important in Britain and Ireland for a number of reasons.  So I made a  visit to attend the adoration of the Blessed Sacrament and Mass this first Friday of May.

Corpus Christi is situated in Maiden Street close to Covent Garden. HOW to get there? See  HERE.

The  church was the first to be dedicated to the Body of Christ in Britain since before the reformation.  When it was opened in 1874 it was with the intention of being specifically devoted to the adoration of the Blessed Sacrament.  And as a result it  naturally became closely associated with the Sacred Heart.

Perhaps the most notable aspect of its association with the Sacred Heart was that the parish priest in the 1880s was none-other than Fr. Francis Stanfield (1835-1914) who wrote the words to one of the most well-known of all hymns to the Sacred Heart in the English language- 'O Sacred Heart'. Listen HERE.  He also wrote the words and music to another great hymn associated with the Blessed Sacrament, 'Sweet Sacrament Divine'.  Listen HERE. ( He wrote several other hymns as well. )

I thought it would be good to reflect on and pray these hymns during the adoration of the Blessed Sacrament and during the mass.  I have to say it was something quite special to say these words in the very church where they must have been first sung.  As I said the words my attention strayed to thinking of a homeless man who had made himself comfortable in the back of the church. When Fr. Stanfield wrote these great hymns the streets around the church must  have been very similar  to the London of today in some respects.


London then, as now,  was full of migrants and homeless people. Then, as now, migrants who are far from home come into the church to pray and light a candle. And no doubt the homeless occupied seats at the back of the church.  It was then that the word 'home' struck me as so important to both hymns: the Sacred Heart and the Blessed Sacrament are described as being a 'home' of 'exiles' and a 'Dear home for every heart'.  Then, (as in 1874)  as now (in 2012) , people come into the church and feel at home in the presence of the Blessed Sacrament.  And me: although I have a house to live in, I am like all those exiles and homeless people who have been comforted in Corpus Christi: I too am yearning for a home and like them I seek it in the Sacred Heart.  We come to (what Teilhard refers to as)  the Sacred Heart as a 'foyer' - a hearth or fireplace around which we gather as a family.

I was hoping that the Parish priest - Fr. Robinson - would have a photograph or portrait of Fr. Stanfield, but, alas,  the church does not possess one.   So, I will see if I can locate something! Before coming to Corpus Christi Fr. Stanfield had succeeded Fr., later, Cardinal Herbert Vaughan as parish priest of  the Immaculate Conception and St. Joseph in Hertford  - where he spent 19 years from 1861.  So, perhaps this church might have a picture?

One personal note for me was that in the chapel of the Sacred Heart there was a picture of St. Claude de la Colombiere -  to whom we dedicated the icon early on during the 'writing' stage. St. Claude, of course, was the person who first brought the devotion to the Sacred Heart (in its 'Paray' form) to this city.  Underneath is a picture of St. Josemaria Escriva , whose writings have been such an inspiration and comfort to me  over the past few years. So, it was nice to see them together in the chapel! It was also - given other posts to this blog - good to see St Thomas Acquinas and St Bonaventure looking down on me from the window above the altar!

From now on whenever or wherever I sing or read  those hymns I will think of the 'hidden gem' near Covent Garden. And from now on, whenever I am in that part of London, I will be making myself at home with all the other exiles.


This is is an important church for all who are (like Teilhard) devoted to the Blessed Sacrament and the Sacred Heart  and could do with help ( that is money!) to restore it to its former glory.  If you feel you can help by making a donation, go Here.  ANYWAY, If you are in London, please pay a visit and ideally spend some time with the Blessed Sacrament: the 'dear home of every heart'.

Visit their website Here to learn more about the fascinating history of Corpus Christi church.