David Richo's The Sacred Heart of the World (2): 'minding the gap'


There are quite a few books which provide detailed  histories of the devotion to the Sacred Heart.  And a complicated story it is. Thankfully, David Richo gives us a very simple way of understanding what that history has been about.

Stage one:  the early centuries AD, in which there emerges a focus on the the crucified and pierced Christ that draws on the Gospels - and especially St. John.  These writings from Origen and others were to inform the later medieval devotion to the pierced heart of Jesus. 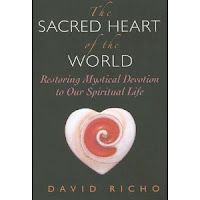 Stage two: the seventeenth French tradition inspired by  St. Francis de Sales, St. Jane de Chantal, St John Eudes, and St Margaret Mary and many others. Whereas the first stage was largely biblical and mystical, the second stage was far more focused on sin and the idea of reparation.
Stage three: Is where we are now.  It is a stage which was initiated by Teilhard: it is a stage which has 'restored the biblical /mystical dimension and liberated us from the sin-centered, sentimentality, and superstition that unfortunately crept in during the seventeenth century onwards' (p8)

Of course, any attempt to provide a simplified history inevitably misses out a good deal, and my own journey has been far more messy and confusing than these three stages suggest.  That said, it is a useful guide to understanding the Sacred Heart.  There can be no doubt that stage two was responsible for much of the imagery which has, in my view, not helped the devotion in the twentieth century.  More than any other aspect of Catholicism, the Sacred Heart has been defined and distorted by the 'art' which has emerged since the 17th century.  If we are to rediscover the biblical and mystical dimension of the Sacred Heart, then we have to address the issue of the image: and that is what the icon set out to do.   What I have found is that the icon has served to focus my mind  - and heart- on rediscovering what happened in stage 1 and 2, all the better to understand what is necessary for stage 3.   I don't believe that it is a matter of  discounting stage 2, quite the opposite, but it does mean that we have to let the light of stage 1 shine through stage 2.   In many ways I think that David's 3 stage model has a more general applicability.  As I reflected on the three stages it occurred to me that the modern world - that is the world of after the enlightenment - has become progressively more and more detached from the medieval world.  We abandoned Aquinas for Nietzsche: so we now have abandoned our faith in science just as we 'killed God' in the 19th century. The Sacred Heart in stage 2 was - above all - a reaction against the violence of the enlightenment.  It was a devotion which emphasised the heart, and not the head.  Human progress, it asserted, was not about human beings becoming smarter, but human beings becoming more spiritual.  Progress was about harnessing our capacity to love, and not just our capacity for knowledge and power.

I think that if we are to advance in stage 3 we have to build on the earlier stages. That is what David's books shows us - well shows me at least.  It is really all about evolution, and not revolution.  In London some underground (metro) stations announce to travellers: 'Mind the Gap'.  That is, the gap between the platform (where you are) and the train (where you want to be).  Perhaps that is how we should read David's book- as a reminder to 'mind the gap' between stage 3 and 1. Some 'traditional' Catholics may read such ideas and be terribly offended by the idea that we should move beyond stage 2.  But that is not what this blog or David's book is saying:  those of us journeying towards the Sacred Heart  are  like travellers on the London underground.  David is telling us to 'mind the gap' and re-connect Heart of Jesus with its biblical and mystical past so as to move forward into the future.  That is really what Teilhard is saying as well: contra Nietzsche and his post-modern followers, we have to realise that progress - faith in the future - has to be built on both a faith in God ( as love) and on a faith in our capacity to know and understand His creation (science) .  That is what the Sacred Heart meant to Teilhard: that is stage 3.
Posted by DWP at 10:14