On the road to Nineveh 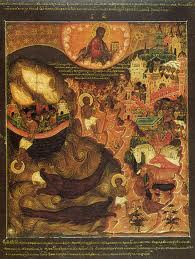 A while back Nikki made a comment on Jonah (April 1st, 2011) which has been rolling around my head. As Nikki notes, in the Gospel of Mathew Jonah is mentioned as pre-figuring the resurrection of Jesus. So an icon of Jonah may be read as the Easter story. I must confess that the story has not meant very much to me, but prompted by Nikki’s comments I have spent some time exploring the story and its iconic representations. All very interesting stuff, but nothing really struck me. And then, as I awoke this morning I thought of Jonah. At first I recalled that, as child, I was very fond of the character ‘Jonah’ in the Beano comic. He was a sailor who, in every episode, ended up being responsible for sinking a ship – or ships. But then I realized that I have been a ‘bit of a Jonah’ myself. By that I do not mean I am a walking disaster area, but that, like Jonah, my life has so often been about running away to Tarshish. I have had a tendency to get on that boat to Tarshish whenever I had a feeling that God was asking me to go to anywhere near Ninevah. 'Sailing to Tarshish' could be the story of my life! And I could run, but of course, I knew that I could not hide. And then, from the deepest and darkest of places a diseased whale surfaced and swallowed me whole. Once inside that beast there was no escape: no ship to Tarshish. And it was in the belly of that illness that I, like Jonah, ‘sank into the underworld’ of my self and truly began to understand the depths of my own foolishness. I realized that my days of running were over: and in due course the whale vomited me up on dry land. I think my journey to the Sacred Heart -that I am making this year - is the trip to Nineveh I was always reluctant to make, even though I have been called to go many times. And for that reason this Easter – on the road to Nineveh - will be the most important Easter of my life. I gather than Tarshish is terribly over-rated anyway. Perhaps Ryan Air do a cheap flight?
Posted by DWP at 12:28