Arrived back in England safely, having added the final inscriptions, essential for any icon, on Friday. Abuna ('Father' in Arabic) Firas, the parish priest, invited me to give a short lecture on the meaning of the image after Mass and Stations on Friday evening, and we took a few photos afterwards of the congregation.

Naur is a small town on the outskirts of Amman. It was originally settled by Latin Christian tribes during the last century. Many of the Jordanian people originate from nomadic tribes, notably the Bedouin, and so most settled towns are relatively new especially in the south of the country. The church dates from the 1940s, and the previous decoration of the apse was done by an Italian lay missionary Michelini in the 1980s. He also did the wall paintings in the shrine at Anjara where I will continue working in May. The town is now greatly expanded and mostly Muslim but the small Christian community has a convent and school.

Jordanian Christians, numbering 2% of the population, are divided among Greek Orthodox (the largest group), Greek Catholics, and Latin Catholics. It is largely overshadowed by the Palestine and Israel but is still itself part of the Holy Land, containing important theological sites such as the place of Christ's baptism, Mt Nebo where Moses saw the Promised Land, the birth place of the prophet Elijah as well as cities from the Decapolis. 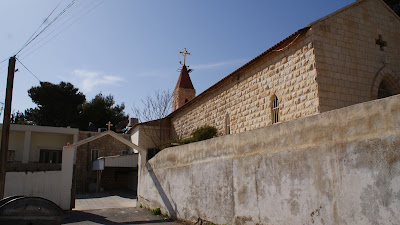