The Sacred Heart as the 'Golden Glow' 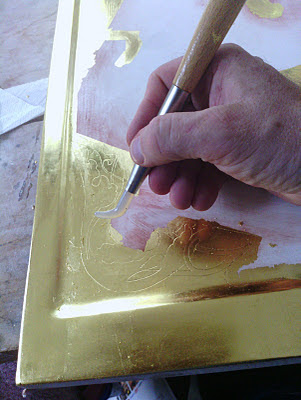 Returning to the question of 'would Teilhard like the icon?' reading Ian's new blog (for his icon of the Trinity for Keeble College, Oxford,  see HERE. ) has reminded me of something I had quite forgotten: the importance of gold in the icon.  When you live with an icon the gold behaves in relation to light is so captivating.   The Greek philosopher Heraclities of Ephesus famously said that 'you cannot put your feet into the same river twice because new water is always flowing on to you', or words to that effect.  And the same can be said of an icon,  as you cannot see it exactly the same way twice because the way the icon reacts to light is constantly changing in subtle ways - and indeed sometimes in quite dramatic ways.  It is why taking a photograph of it is so disappointing : no picture can really show the way in which the light changes the image.  Perhaps it is this which makes the icon such a powerful aid to prayer?   Teilhard liked to talk of the Sacred Heart as the 'golden glow' -  he used the English words.  And so I think that the fact  that the icon is very much a 'golden glow' would be something he would have commended, and indeed something he would have asked us to reflect and meditate upon.

Gold is not about giving the icon value, in the worldly sense. The value of the icon is its subject, in this case the Most Holy Trinity. Rather, Gold has a very particular set of qualities, which speak most eloquently of the nature and presence of God, which makes its use in iconography eminently suitable. According to Christian mystical theology, especially in the teachings of the early fathers and the Hesychasts of the eastern Church, these are fundamental ways in which we can describe God: as Light that can be perceived and reveals Itself, but yet as utterly Unknowable, without limits or definition. "True Light itself, Eternal Day, you are far brighter than the sun Illuminating with your grace, The deep recesses of each heart" (VIth century hymn attri. to St Hilary of Poitiers).  Gold speaks of this divine light: it is a 'bright darkness', capable of capturing and intensifying the power of light to the point that it is blinding, while at the same time so dark it seems to have no end.
I really like the quote attributed to St. Hilary: God as light that  illuminates the deep recesses of our hearts.  When we  reflect on the gold in the icon it should draw our mind - and heart - towards contemplating the divine light of  God's love as expressed in the Heart of Jesus.
Posted by DWP at 12:19