Henry VIII, the Sacred Heart and the Five Wounds of Christ 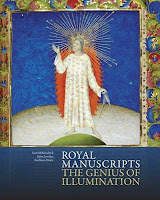 There is a most remarkable exhibition in the British museum at the moment.  We spent a couple of hours yesterday  entranced by the illuminated manuscripts on show.  As we were on the way out I noticed the recently discovered ‘prayer roll’  that once belonged to a young  King Henry VIII - before he broke with Rome.  The discovery of the roll has caused much excitement as it shows what a devoted Catholic Henry was as a young man. READ MORE HERE.  and HERE.

As I looked at the prayer role I noticed something which is important to our understanding of the Sacred Heart. The roll contains a fascinating image of the five wounds which features the wounded heart of Christ.  The young Prince Henry would have been familiar with this popular devotion  (see HERE)
Henry’s prayer roll shows an image of the five wounds which is comparable to similar images found at this time – late 15th century. And when we compare the five wounds image in the roll with other such images we can see a clear line of development between this symbol and that later proposed by  St. Francis de Sales in 1600 - (above right) .   In turn this design was to inform St. Margaret Mary's  drawing of the Sacred Heart - (left).  And like the Sacred Heart, later on  it was to be adopted as a symbol of opposition to anti-Catholicism.   It was used, for example, in the banner of the ‘Pilgrimage of Grace’ (below) in 1536 which showed public opposition to Henry's attack on the Catholic Church. (See  HERE. )

Henry must have  had an intense devotion to the five wounds of Christ as a young man.  As the British Library notes:
The prayer roll provides unique evidence of Henry VIII's early religious beliefs. It demonstrates that, as a young man, Henry practised the devotions characteristic of the late medieval popular piety that just twenty-five years later he would destroy as the Reformation King.
It is ironic that the symbol we find on his prayer role  - and which was once a focus of his devotion  - was to be subsequently used as a symbol to rally opposition to his destruction of the Catholic church in these islands.   When, however, we reflect on the parallels as between the image of the five wounds and the later images of St. Francis de Sales and St Margaret Mary, and the use of  both of these images to defend the Church the links between them become very important indeed - especially in Britain.  Perhaps British Catholics  should adopt the symbol of the five wounds as a banner for a new 'Pilgrimage of Grace': opposition to the marginalization of moral and religious values in the public square!

Henry VIII's prayer roll should thus serve to remind us that the Sacred Heart is rooted in the history of  Catholicism from the earliest times, and that the image of a God who loves us and suffered for us and suffers with us is as relevant to the 21st century as it was to the 15th and  16th centuries. And, that when we reflect on such images that were once a focus of prayer for a king who did so much to destroy the Church he once loved we can remember that, in the Heart  of the King of Kings - who shows us what the love of our neighbour really looks like -  we will all be ultimately united. 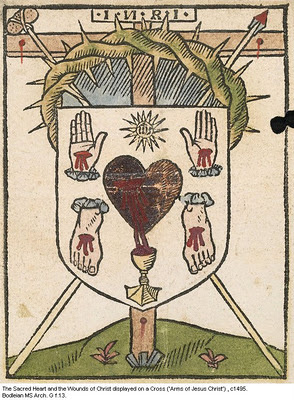