Teilhard's Litany of the Sacred Heart: ( 15 ) The activant of Christianity

Reflecting on Sr. Johanna's stained glass window (below, left)  mentioned in  the previous blog, and how she represents 'Heart Speaks to Heart' reminds me of the dynamic quality of God's love and how Teilhard in his litany (HERE) refers to the Sacred Heart as ' the activant  of Christianity'.

When we look at our icon we see a similar response to the Sacred Heart: as the source of a dynamic energy called love.  Beginning at the very centre we have a spiral shape inside the glowing heart.  This is surrounded by the Omega symbol which is surrounded by another circle. Then another circle of fire, then a great swirl of red surrounded in turn by four other circles.  Then, at the bottom of the icon we have the Cherubim and the Ophanim  - the wheels within wheels.  Like Sr. Johanna, Ian has beams of light  radiating from the centre.  These serve almost as spokes of a great cosmic wheel.  At the top we also see the great waves of gravitational forces which hold the cosmos together.  At the same time we cannot help but being reminded of Dante's description of God's love as the energy which drives all creation.  A ' love that moves the sun and the other stars.'  And circles within circles feature in Dante's description of God.  For Teilhard Christ  - as 'le Grand' 'universal Christ' we see here in the icon - was, as he explained to Blessed Gabriel Allegra:  'the source of  light and fire'.   To which Allegra replied  that this reminded him of an expression of St. Francis ' ignita et melliflua vis amoris Dei'   - 'the ' fiery sweet force of the love of God'.  Which Allegra says ' is very appropriate to the Heart of Jesus and the Holy Spirit'.

The Sacred Heart as a symbol of the sweet light and fire of God's love  - as a force and energy -  is for Teilhard the very  'activant' of Christianity.   The Sacred Heart  is a powerful devotion - or 'attraction ' as Teilhard preferred to say - because it can, when we are open to it  ( as the summary of our faith),    activate and energize human creativity.  It can pull us forward towards a fuller realization of our individuality and our potentialites.  A devotion to the Sacred Heart is the most powerful way of activating our spiritual energy.  That is why Teilhard saw it as being so important for the Christianity of the future.  It gives ZEST to Christianity.  It excites , it gets us going.  The Sacred Heart has the capacity to animate us.  If only we would open up to this love as did Francis and other saints.  The Sacred Heart gives us, above all, a spiritual dynamism: a will to act and build the Kingdom of God.  It seems to me, that if the Church is  itself to evolve and face the challenges of this millennium it has to open itself up to this activant: the 'fiery sweet love of God'.  And when 'Heart speaks to Heart ' we see all things in Christ and then the wheels starting turning and God's love is creative and active in us and drives us forward.  It gives us a sense of urgency.

The  urgent need in our times for activating a renewed devotion to the Sacred Heart was made explicit by Blessed John Paul when he expressed his: 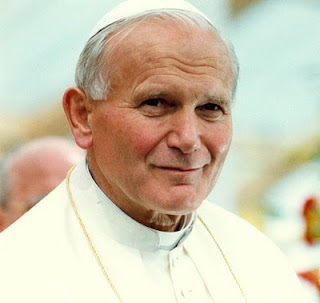 ...approval and encouragement to all who in any way continue to foster, study and promote devotion to the Heart of Christ in the Church with language and forms adapted to our times, so that it may be transmitted to future generations in the spirit which has always animated it. The faithful still need to be guided to contemplate adoringly the mystery of Christ, the God-Man, in order to become men and women of interior life, people who feel and live the call to new life, to holiness, to reparation which is apostolic cooperation in the salvation of the world, people who prepare themselves for the new evangelization, recognizing the Heart of Christ as the heart of the Church: it is urgent for the world to understand that Christianity is the religion of love.  *


The re-discovery of the Sacred Heart  as the summa of Christian faith is, therefore, a matter of some urgency.  We need to be activated !   The Sacred Heart is, as Teilhard described it,  the activant of Christianity. Blessed  John Paul therefore encourages us all to  ' foster, study and promote devotion to the Heart of Christ in the Church with language and forms adapted to our times, so that it may be transmitted to future generations in the spirit which has always animated it.'  I think that, in  its own very very small way, this icon is doing that: helping to promote  a devotion to the  Heart of Jesus which is  expressed in a language and in a form which is relevant to activating and re-animating a devotion to the Sacred Heart in our much troubled world.