Following the performance of 'Quelque Jour' at Notre Dame, (See here) and with the prospects of another performance at the Madeleine we decided to walk to the church of  Saint François- Xavier which is on the other side of the Seine  - in  Paris VII.  (Visit church HERE)   I thought this appropriate for several reasons.  The first is that I had discovered – the previous day  - that the body of St. Madeleine-Sophie Barat, (1779-1865) -the foundress of the Societe du Sacre-Coeur-de Jesus (SSCJ) had recently (2009) been re-located to the church.  I had met a member of the Society (Sister Mary) in 2010 at a talk  I gave on Teilhard and the Sacred Heart in London , and the history and dedication of the Society served as a source of inspiration for me  to dedicate 2011 to the Sacred Heart.  So, it seemed right to follow in the direction marked out by a Madeleine! It was truly providential that St. Madeleine-Sophie should now be at rest in the same church in which the artist who had painted the image of the Sacred Heart that Teilhard loved so much – Henri Pinta – also did some of his best work. ( Read about the Society and St. Madeleine-Sophie HERE. Go here for information on Pinta.) 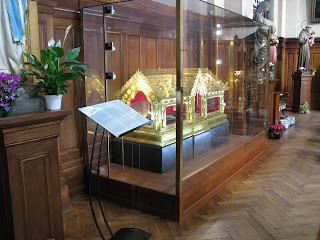 St. Madeleine-Sophie's remains now reside in a large chapel dedicated to the Sacred Heart  to the right as you enter the church of Saint François- Xavier. It  is a beautiful church to visit - and a lively parish.  She did such remarkable work in Paris it is so good that she now rests in this church in Paris.  To find out more about the transportation and reception of her body go HERE.  It was a big day!


One biographer notes of  that  her  ' spiritual insight was born in the midst of years of turmoil and violence, unleashed by the French Revolution. Her initiative was in direct response to the devastation she experienced all around her, particularly in Paris, and from 1800 she committed herself to the restoration and renewal of her broken world. The spiritual energy for such a vast project came from Sophie's insight into the love of God revealed in the Heart of Christ wounded on Calvary. The ultimate range of her vision was the transformation of her world, into a multitude of adorers, in spirit and in truth."

(Madeleine Sophie Barat - A Life, Phil Kilroy, RSCJ,  SEE HERE)
In the chapel of the Sacred Heart one of her most favourite prayers comes to mind:

Oh Sacred Heart of Jesus, give me a heart that is one with your own; a humble heart that knows and loves its nothingness; a gentle heart that holds and calms its own anxieties; a loving heart that has compassion for the suffering of others; a pure heart that recoils even at the appearance of evil; a detached heart that longs for nothing other than the goodness of heaven; a heart detached from self-love and embraced by the love of God, its attention focused on God, its goodness is its only treasure in time and in eternity.
Amen
It would be so nice if the church could make this prayer available in  several languages so that those who pray there could use her very words to pray to the Sacred Heart, in the heart of Paris. It is a great prayer. 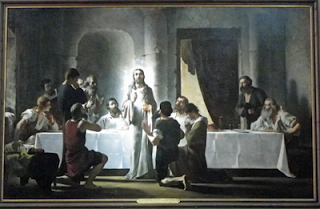 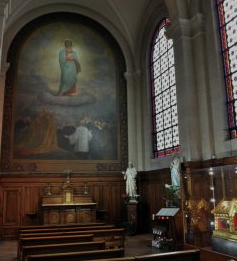 For me what was most interesting about Villé’s Sacred Heart is the representation of the heart itself.  It is  - as Teilhard would later put it – a ‘golden glow’ and not a heart of the standard or traditional type.   Pinta would have seen this image many times.  After all, he had painted the picture of the Death of St. Joseph  in 1915 which is in the chapel of St Joseph on the direct opposite left hand side of the church.  He had also painted some years later the ‘Hommage aux morts de la guerre de 1914-1918’, completed in 1921.  Around the same time he also painted the Sacred Heart.  Perhaps this image by Félix Villé gave Pinta an idea for his picture?  It is not an unreasonable assumption to make. 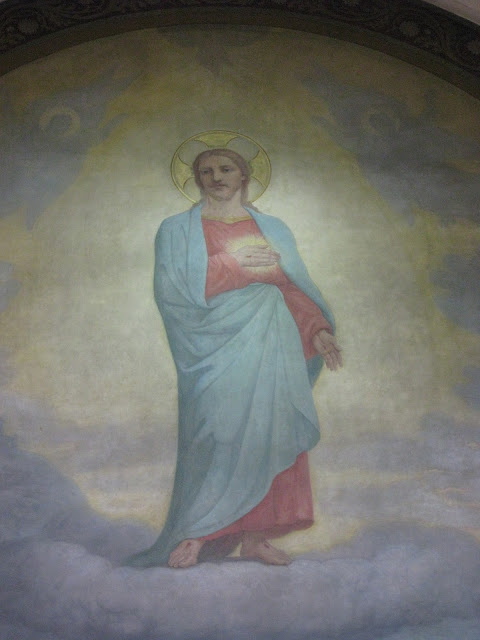 The painting interestingly enough shows the Seraphim at the top of the picture.  They are not very clear and must have faded over time.  But one thing is very clear and that is the golden glow of the heart and the golden glow surrounding  the body of Christ.  This appears as a heavenly energy which is radiating from the Father, Son and Holy Spirit.  There is a shape at the top which appears to be a hand, or possibly a dove? It is the protective cover of this divine glow which those who are shown at the foot of the painting are praying for .  In the words of the quote from Archbishop Guibert – the driving force behind the project - written under the picture:’Christians are convinced that the national homage offered to the divine Heart of Jesus will be the salvation of France’.
As to Félix Villé, the guide to the Church guide tells us that he studied at the Ecole des Beaux Arts, and that he has other paintings in several places in France – but I have not been able to locate any more information than his date of birth!  Henri Lerolle, on the other hand is well documented and his paintings may be viewed in many museums.  See Here. 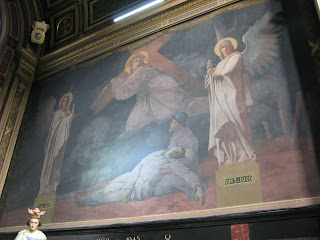 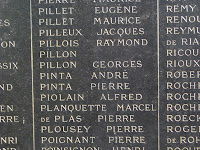 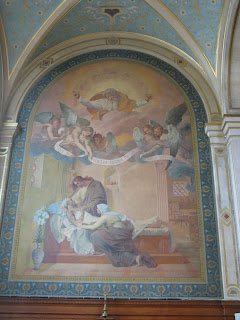 The other reason for coming to this Church was, of course, to see  at  first hand Henri Pinta's work: his Death of St Joseph in the chapel of St Joseph - on the immediate left hand side as you enter the church, and the 'chapelle des morts', on the first right as you go in.   They are impressive, and especially moving when we reflect that whilst painting these pictures he must have been in mourning for  the loss of two sons during the war.   Their names are listed on the memorial, which suggests that this was their parish church or that there was some close connection.  The powerful paintings in the chapel show two dead soldiers.  If they are not actual portraits of his sons Andre and Pierre, I am sure that they were in his heart and mind as he painted them. 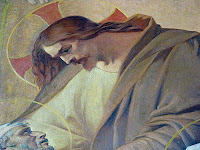 The image which Teilhard treasured as - for him - the best representation of the Sacred Heart may well have been conceived in this Church.  I find the face of Christ in the death of Saint Joseph very evocative of the image on the simple holy card produced at 6 Place St Sulpice.  The central metaphor of the piece is light:  we see that the lamp on the small shelf is now extinguished, and the wick is smoking.  But, St Joseph is now surrounded by the light of Christ.  Again, in Pinta's Sacred Heart we are drawn to the light glowing from the heart: the light of the world.  And when I came out of the chapelle des morts and looked right the first thing I saw was the glow of the Villés Sacred Heart in the next chapel.  And so would have Pinta.  There can be no doubt about that.

I left the Church with a sense of  a circle having been completed, and another having begun.   I had prayed in a chapel of the Sacred Heart containing the earthly remains of one of the greatest promotors of the devotion to the Sacred Heart and whose life is an inspiration to us all.  At  the same time, I felt closer to understanding the approach to the Sacred Heart taken by Pinta.   Having lost two sons and having mourned and prayed for them in this very Church of Saint François-Xavier, he paints a  picture of the Sacred Heart  in 1921  - the same year as the paintings in the chapelle des morts - which does not dwell on the wounded physical heart of Jesus , but like Félix Villé-  asks us to focus on the  heart as a source of light and energy which illuminates and gives life.  It is a heart, which in the words of the great woman who now lies with his paintings, is ' a humble heart that knows and loves its nothingness; a gentle heart that holds and calms its own anxieties; a loving heart that has compassion for the suffering of others; a pure heart that recoils even at the appearance of evil; a detached heart that longs for nothing other than the goodness of heaven; a heart detached from self-love and embraced by the love of God, its attention focused on God, its goodness is its only treasure in time and in eternity.'
As I left the church I asked St Madeleine Sophie to pray for us to be ever open to that goodness and love  that radiates from the Sacred Heart. A heart, like St Marie Madeleine's heart, which is deeply sorry for all the times we have chosen to live our lives in darkness rather than in the light.