Following the Sacred Heart to Paris: (1) The icon set to music.

When I set out on this journey to explore the Sacred Heart through an icon I was determined just to allow the  process of writing and  reading the icon to unfold , rather than imposing an agenda on it.   I took Ian's advice that the icon had to be 'allowed to work' as my guiding principle.  And, as this is a year which I have dedicated to the Sacred Heart, it was fitting that I should put all my trust in the Sacred Heart and just allow things to happen.  And last week the icon took me to Paris!  One of my sons is a director of a choir and he kindly offered to write a piece of music (called 'Quelque jour') which could explore the central theme of the icon, and of Teilhard's work: love.  To this end he composed a wonderful piece which sets Teilhard's famous words to music for female voices.  Here is the text.


Given Teilhard's views on the role of  the 'eternal feminine' it was most appropriate that it was performed by female voices, in Notre Dame -  Our Lady, who is on the left in our icon.  'Quelque jour' had its premiere in a concert given on the high altar in the Cathedral of Notre Dame  on the 21st October, 2011, and later on in the afternoon of the same day it was also performed on the altar of the church of the Madeleine, and the following day (the 22nd October)  the piece was performed in the magnificent surroundings of Chartres Cathedral.  It does not get better than that!  My wife and I attended the first two performances in Paris. Naturally, we thought it was very beautiful, and I am delighted to report that this was also clearly the view of the audiences!   I made a few  recordings, but sadly they do not do the performance justice, so I hope that we may have a proper recording in time. 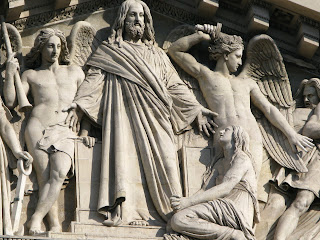 It was again so appropriate that the second performance of  'Quelque jour'  was given at a Church dedicated to Mary Magdalene - as she also features on the icon.  This in turn directed my thoughts to exploring the importance of the BV Mary and Mary Magdalene in our icon.  By following these two women I thought I could get closer to understanding the Sacred Heart.  And this proved to be the case.   ( It was also nice to see Gabriel and Michael as well as  Mary Magdalene on the front of  La Madeleine! )
Posted by DWP at 13:09