Teilhard cited in Laudato si /Be praised: on the care of our common home! 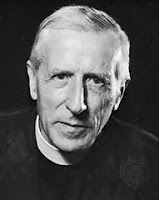 I am sure that if Teilhard were alive today he would be smiling at the prospect of a Jesuit Pope, trained as a chemist, with the name Francis publishing an encyclical on the global environmental crisis.  Teilhard had a great love of St. Francis.  Speaking to Blessed Gabriel Allegra  he remarked that ' St Francis is so dear and so close to me! I believe he assists me in my difficulties and blesses my work'. ( My Conversations with Teilhard de Chardin on the Primacy of Christ, p55)  I have just read the leaked draft of Laudato si (here) and was absolutely delighted to see that Teilhard gets a reference. ( fnote 53:  'In questa prospettiva si pone il contributo del P.Teilhard de Chardin;' * How fitting!!  Teilhard, after all these years, is mentioned in the official teaching of the church!! This surely must mean that Teilhard is finally acknowledged for his immense contribution to the Church's thinking on  the relationship between  Christ, humanity and the Cosmos. Just hope that the reference makes the final version - Teilhard still has plenty of enemies and there are no shortage of anti-Francis people who will no doubt pounce on him for daring to mention Teilhard and for the argument of Laudato si as a whole.  If ever there was a time to pray for Pope Francis, now is a very good time!

In advance of the publication the Pope had this to say:

Pope Francis asked the faithful and all persons of good will to receive his new Encyclical letter on the care of creation with open hearts. Speaking to pilgrims and tourists gathered for his weekly General Audience on the eve of the much-anticipated document’s official release, Pope Francis said, “Tomorrow, as you know, the Encyclical on the care of the ‘common house’ that is creation will be published.” Pope Francis went on to say, “Our ‘house’ is being ruined, and that hurts everyone, especially the poorest among us.” The Holy Father concluded, saying, “My appeal is, therefore, to responsibility, based on the task that God has given to man in creation: ‘to till and tend’ the ‘garden’ in which humanity has been placed (cf. Gen 2:15). I invite everyone to accept with open hearts this document, which places itself in the line of the Church's social doctrine.”


St Francis of Assisi, pray for for the Pope.  Sacred Heart of Jesus, we place all our trust in you - the  great sign of ' l’amor che move il sole e l’altre stelle'.   May the Holy Spirit open our hearts to the message of Laudato si .

=======
In respect of this statement:' Il traguardo del cammino dell’universo è nella pienezza di Dio, che è stata già raggiunta da Cristo risorto, fulcro della maturazione universale.' ( The ultimate destiny of the universe is in the fulness of God, which has already been attained by the risen Christ, the measure of the maturity of all things  .'
Posted by DWP at 10:08