Laudato si - one giant leap for our common home 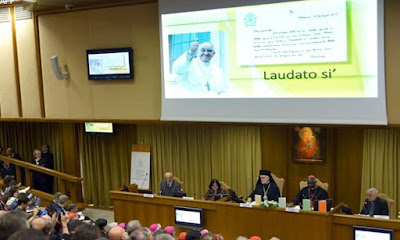 Well, what a day!  Watched the live broadcast of the launch of Laudato si - and no longer had to struggle with my terrible Italian and downloaded the English version. Was so pleased to see the reference to Teilhard in the final text * , and having read the whole thing  through a few times I think that it is a document that is truly a landmark in Catholic social teaching. It  also conveys the spirit of what Teilhard was trying to say about the need for a more cosmic sense of Christ and of the need for Christianity to have a 'sense of the earth'.  This will give rise to a great debate and hopefully action to 'care for our common home'.

My initial thoughts are about the press launch.  I was moved by Metropolitan John Zizioulas's contribution - especially his emphasis on how the ideas contained in the encyclical will serve the cause of Christianity unity.  This was, of course, Teilhard's great belief - that a more cosmic sense of Christ, and a sense of the earth would promote unity!  One point in particular stuck out- his observations about the ecological implications which relate:

...to the very heart of the Church, which is the Holy Eucharist. In the celebration of the Eucharist, the Church offers to God the material world in the form of the bread and the wine. In this Sacrament space, time and matter are sanctified; they are lifted up to the Creator with thankfulness as His gifts to us; creation is solemnly declared as God’s gift, and human beings instead of proprietors of creation act as its priests, who lift it up to the holiness of the divine life. This brings to mind the moving words of St. Francis of Assisi with which the Encyclical opens: “Praise be to you, my Lord, through our Sister, Mother Earth.” As St. Gregory Palamas and other Greek Fathers would put it, the whole of creation is permeated by God’s presence through His divine energies; everything declares God’s glory, as the Psalmist says, and the human being leads this cosmic chorus of glorification to the Creator as the priest of creation. This way of understanding the place and mission of humanity in creation is common to both Eastern and Western Christian tradition, and is of particular importance for the cultivation of an ecological ethos.

This was so very evocative of  Teilhard's great Mass on the World. (Although on reflection, Teilhard was always very sympathetic to the Greek fathers!So, no surprise really.)

The other thing that struck me -which  again brought Teilhard to mind - was the presence of a scientist on the panel, Hans Joachim Schellnhuber.  He began by talking about the important relationship between faith and reason, science and religion.  It is a sign of how far we have come since Teilhard that we are now able to have a dialogue of this kind - and to see the way one can inform the other.

So much to say about this great encyclical!


====
The context of the Teilhard reference is:

"83. The ultimate destiny of the universe is in the fullness of God, which has already been attained by the risen Christ, the measure of the maturity of all things.[53] ...The ultimate purpose of other creatures is not to be found in us. Rather, all creatures are moving forward with us and through us towards a common point of arrival, which is God, in that transcendent fullness where the risen Christ embraces and illumines all things. Human beings, endowed with intelligence and love, and drawn by the fullness of Christ, are called to lead all creatures back to their Creator."

( Isn't this what is depicted in the icon inspired by Teilhard?)