As we reflect on the arrival of the wise men, I  think it is important to also keep in mind the sense of the cosmic significance of Jesus that we find – above all – in St Paul. (‘He is the image of the invisible God, the firstborn of all creation. For by him all things were created, in heaven and on earth, visible and invisible’. Col 1: 15-16)   Interestingly, Pope Benedict – perhaps showing his Teilhardian side once again  – observes in his book Jesus of Nazareth: The Infancy Narratives:

If these wise men, led by the star to search for the king of the Jews, represent the movement of the Gentiles toward Christ, this implies that the cosmos speaks of Christ, even though its language is not yet fully intelligible to man in his present state. The language of creation provides a great many pointers. It gives man an intuition of the Creator. Moreover, it arouses the expectation, indeed the hope, that this God will one day reveal himself. And at the same time it elicits an awareness that man can and should approach him. But the knowledge that emerges from creation, and acquires concrete form in the religions, can also become disoriented, so that it no longer prompts man to transcend himself, but induces him to lock himself into systems with which he believes he can, in some way, oppose the hidden powers of the world. 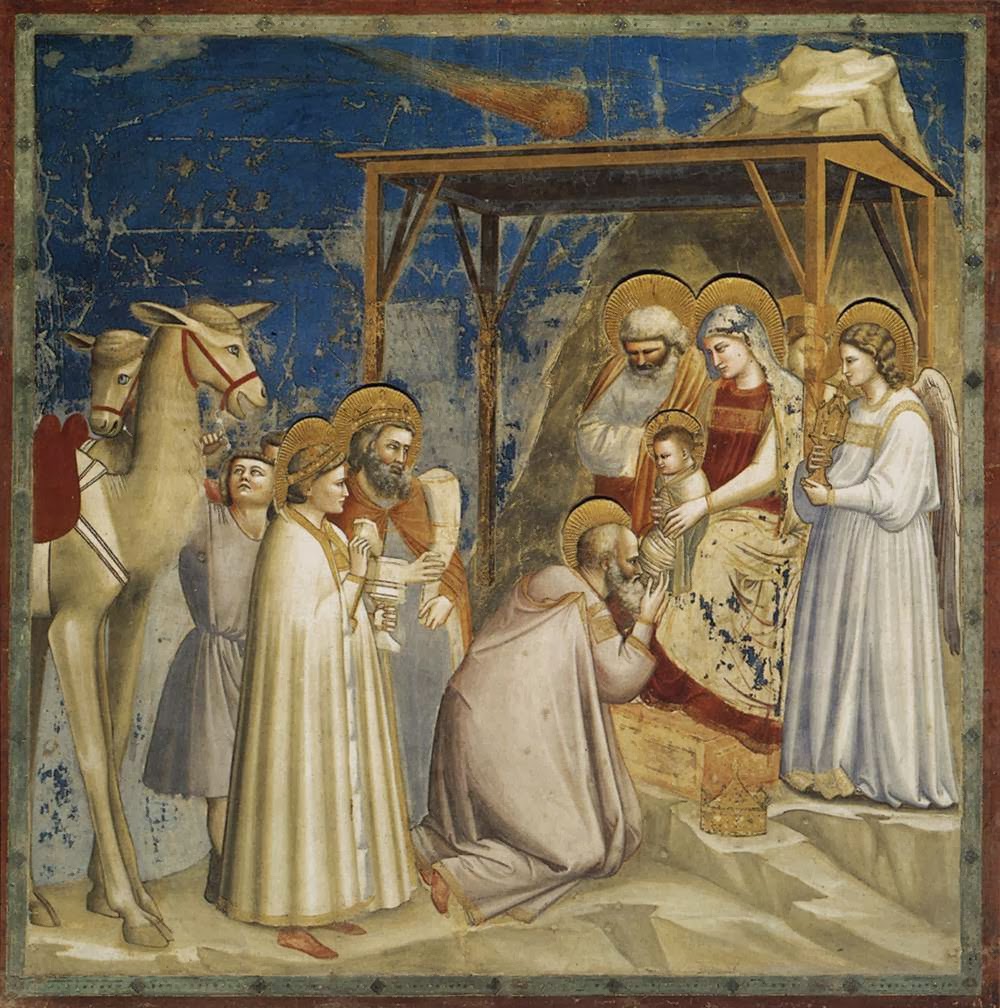 The Gospel account in Mathew tells us that they were 'wise men' who were led to Jesus by following a star.  He uses the word ‘ magos’ ( μάγος ) rather than the Greek for wise (sophia) and refers to the 'wise' men (μάγοι). These  μάγοι as I understand were – among other things  astrologers. At this time, and for many centuries afterwards such people were considered to be scientists of sorts.  They saw in the stars the answers to all the most profound questions of human existence.  Such men were sought out and respected by the powerful – such as Herod.  Then, as now, there is a dangerous relationship between knowledge and power and knowledge as power.  (‘nam et ipsa scientia potestas est’, as Bacon would put it , knowledge is power. )  And what did the μάγοι find? That the answer to all the questions of human existence was not to be found in the stars- it was to be found in a small baby. They had found that which – in Dante’s words – moved all the stars, the love of God as enclosed in the flesh of a little boy. They had found, in the words of the Litany of the Sacred Heart ‘the great treasury of all wisdom and knowledge’.  Thus, this event had such cosmic manifestations: it moved a star.   This was knowledge and wisdom far too dangerous to give to those with power.  And so, they go home by another way – giving Herod a wide berth. But this great source of all wisdom and knowledge is available to pour into our hearts and heads if we are humble enough to prostrate ourselves and worship Him with all our hearts and minds. If only we could keep this great cosmic message of the epiphany before us all year. Devotion to the Sacred Heart is, I believe, one way in which we can hold on the message and meaning of the visit of the 'wise men' as we make our way home.  ( O Sacred Heart, our home lies deep in you!)