Pope Francis and the human heart of the Church 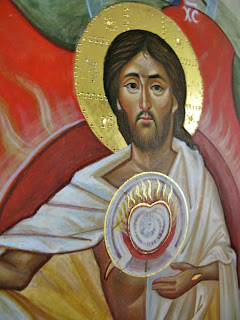 The relationship of Pope Francis to the Heart of Christ continues to fascinate me – especially with regard to the importance of the Sacred Heart to the Jesuit order.  A recent piece by ALEJANDRO BERMUDEZ, in the  National Catholic Register (HERE)  took up the theme. Bermundez comments that:

"for Pope Francis, the heart of the Church is, well, the heart. That is, the human heart and its transformative relationship with God’s heart. The heart in Jesuit spirituality is a crucial concept. The Jesuits were the first to promote devotion to the Sacred Heart of Jesus around the world. Initially, they were accused of heresy for promoting the concept that the human heart of Jesus was a permanent living source of mercy, as revealed by God to St. Marguerite Marie Alacoque in the 17th century. Unlike the modern reduction of the heart to the experience of feelings, which are to be followed at the expense of our brains, in the Jesuit tradition, the heart is the core of the human person, the place of the soul, where the encounter between God and man takes place. The heart is, in fact, not only the most inner sanctum of the human person, but also the root of the human will. According to the Jesuit understanding, the heart is the source of human action and endurance. Therefore, both personal conversion and solidarity begin with the human heart.

This is the concept of heart that has formed Pope Francis. In 10 years of written homilies, speeches and pastoral letters, the then-archbishop of Buenos Aires has mentioned the heart from this perspective an average of four times per occasion. In some documents, like one of his Lenten pastoral letters, the human heart is mentioned as much as 26 times…. In another homily, addressed..to teachers from Catholic schools in the Buenos Aires Archdiocese, he said: “To those who lead these institutes, I ask for your courage, the courage to assume the responsibility of forming Christian hearts, hearts that know they have encountered Jesus Christ.” The centrality of the human heart modeled according to the heart of Jesus has not only been an issue frequently mentioned by Pope Francis in these first weeks of his papacy. It has also been at the heart (pun intended) of his message. And it is a message he believes can be shared with other religious traditions; in fact, also in 2004, Cardinal Bergoglio was invited by the Buenos Aires Jewish community — one of the world's largest — to deliver the comment after the reading of the Scripture during the feast of Rosh Hashanah. Commented Cardinal Bergoglio: “‘And these words, which I instruct to you this day, shall be in your heart. And you shall explain them to your sons. And you shall meditate upon them sitting in your house and walking on a journey, when lying down and when rising up’ (Deuteronomy 6:6-7). This is our memory. We cannot lose it. The fascination with idols leads us to a weakening of the memory of us all, each and every day of our lives.”….most importantly, he believes that if there are no changed hearts, there will be no eyes with which to praise God at the sight of elegant liturgical vestments; no families to enjoy the true definition of marriage; no person to receive with love a newborn baby.   Or, in his own words, which we are challenged to take personally: “This is the Lord’s commandment: Surrender our hearts.   Open them and believe in the Gospel of truth; not in the Gospel we’ve concocted, not in a light Gospel, not in a distilled Gospel, but in the Gospel of truth.”