An icon by any other name


I gave a talk on the icon last night at my local parish  - talked way too much of course, so no change there!  But, many thanks to everyone who came and especially to the parish  priest who invited me to speak. ( He should have said 'briefly'!)

We have a word in Welsh which is both the verb to teach and to learn, ‘dysgu’. So to say ‘Rwy'n dysgu’ means both ‘I teach’ and ‘ I learn’.  I don’t know how many other languages share this peculiarity, but I have always thought it  is really quite profound.  Oftentimes it is only when we communicate ideas that, in a sense, we understand what we mean.  In explaining to others we explain to ourselves.  The first thing I learnt last was that, having begun this whole journey to rediscover the Sacred Heart, I now find myself very much back where I started, but this time just that little bit wiser.  Having said quite rude things about the traditional image  I realized that actually I had come to see it rather differently.  It is still not to my taste, but I suppose it is all a matter of ‘ what matters is what works’.  I think I am less hung up about the ‘Batoni’ type than I was at the start.  As Teilhard said, the Sacred Heart is ‘almost more than the mind can comprehend’, so no image can possibly capture what it means.   The greatest artist who ever lived could not possibly capture what the Heart of Jesus means.  All art is only a beginning, not an end.  Of course, I should have actually said that, but then again I should have said other things as well!  But as I was listening to some of the points the audience made it came to me that perhaps there is an icon which can serve as an important starting point for rediscovering the Sacred Heart: the Shroud of Turin.  It was interesting that Pope Francis on the eve of Easter  remarked that : 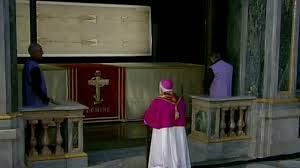 ... we do not merely “look”, but rather we venerate by a prayerful gaze. I would go further: we are in fact looked upon upon ourselves. This face has eyes that are closed, it is the face of one who is dead, and yet mysteriously he is watching us, and in silence he speaks to us.
How is this possible? How is it that the faithful, like you, pause before this icon of a man scourged and crucified? It is because the Man of the Shroud invites us to contemplate Jesus of Nazareth. This image, impressed upon the cloth, speaks to our heart and moves us to climb the hill of Calvary, to look upon the wood of the Cross, and to immerse ourselves in the eloquent silence of love. Let us therefore allow ourselves to be reached by this look, which is directed not to our eyes but to our heart. In silence, let us listen to what he has to say to us from beyond death itself. By means of the Holy Shroud, the unique and supreme Word of God comes to us: Love made man, incarnate in our history; the merciful love of God who has taken upon himself all the evil of the world to free us from its power. This disfigured face resembles all those faces of men and women marred by a life which does not respect their dignity, by war and violence which afflict the weakest… And yet, at the same time, the face in the Shroud conveys a great peace; this tortured body expresses a sovereign majesty. It is as if it let a restrained but powerful energy within it shine through, as if to say: have faith, do not lose hope; the power of the love of God, the power of the Risen One overcomes all things. So, looking upon the Man of the Shroud, I make my own the prayer which Saint Francis of Assisi prayed before the Crucifix:
Most High, glorious God, enlighten the shadows of my heart, and grant me a right faith, a certain hope and perfect charity, sense and understanding, Lord, so that I may accomplish your holy and true command.
Amen. 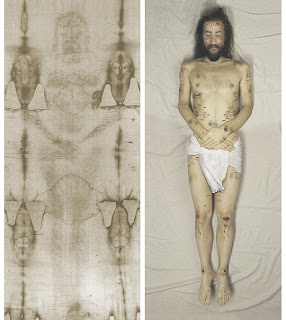 I think this is a very important statement.  The Pope invites us to contemplate the shroud as an icon. It is a window through which we can meditate on the pierced heart of Jesus -  and before which we can say the great prayer of Francis that  asks God to ‘enlighten the shadows of our heart’ so that we can ‘accomplish’ His and ‘true command’.

Of course, it would be wonderful if the shroud is indeed  Jesus’s very shroud.  But the Pope’s point is that whatever its authenticity  it can still serve as an icon.  An icon that we can use as a window to let in  Divine light to enlighten our hearts.  If you look at the shroud you can see that the victim was wounded in the side.  Perhaps it is the best image of the Sacred Heart?

So, perhaps I should have said that last night?

The other related point came to me for the first time when looking up at the giant slide of the icon was related to the prayer of St. Francis. ( I just can’t seem to stop him coming to my mind when reading this icon!)  We see a ‘cosmic' Christ seated in Glory and Majesty with all of the cosmos at his command – the Alpha and Omega. And yet it occurred to me that  there is one thing in the created order  represented in the icon that God cannot command - the human heart.   What came into my head was something Cardinal Manning said in his book  The Glories of the Sacred Heart, and I managed to find it eventually as I was beginning to think I  made it up.

God has an infinite power of command; but even the power of command in God Himself cannot make man love Him.  The infinite power of the word of God is such that when He said, ‘Let there be light’, there was light.  At His  word all creation sprang into existence; the command of God went forth, and it was done. But the command of God from the beginning has been saying, ‘ Thou shalt love the Lord thy God with thy whole heart’; and we have not obeyed. (The Glories of the Sacred Heart, pp63-4)

And when I said those words ( well some of them) last night it was as if I understood the icon for the first time!  We see Christ drawing all things to himself: all of creation by his command. AND yet He cannot command our hearts, we have to give him our heart, as He gave His. I did not quite get that until last night.

And so the prayer of St. Francis before the crucifix has a great resonance now every time a reflect on that Seraphim on the top left and gaze on the cross held by St Gabriel and St Michael:

Most High, glorious God, enlighten the shadows of my heart, and grant me a right faith, a certain hope and perfect charity, sense and understanding, Lord, so that I may accomplish your holy and true command.
Amen.