Looking for angels and finding a fire alarm 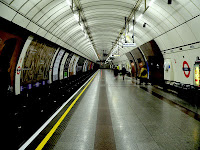 The working week began with the Feast of St Thomas Acquinas  ( 28th January).  The fact, of course, that he known the ‘ Angelic Doctor’ of the Church served to focus my attention once more on the angels in the icon.   His writings on angels are a major source of the Church’s teaching on the subject and so over the past few days I have read and reflected further on the topic and its relation to the Sacred Heart.  Acquinas discusses angels in Part one of the Summa, (questions 50 – 64).   Mulling over what he says is a good way to  cope with the delights of the London underground system – especially as you travel through Angel station ! ( So called after a pub on the site which was built in the early 17th century.)   Are there ‘angels’ on the Northern Line?  After reading Acquinas I had little doubt that there were indeed angels on the Northern Line.

More to the point, I thought, are there angels in the modern Church?  It is interesting that in my local Church that was built in the 1990s - to replace an earlier  structure which was beyond repair- I can’t find any angels ( well images of angels) at all!  Perhaps their absence in this modern building (I think that there was an angel or two in the old one) is indicative of the fact that angels no longer have the kind of place they had a generation or so ago.  Although we mention the angels in prayers and in the Mass, and read about them in scripture, we ( that is me) tend to put them to the back of our minds and not think about them.  But we should, as Catholics, renew our appreciation of their absolutely central role in our faith. The Catechism makes it clear enough:


350 Angels are spiritual creatures who glorify God without ceasing and who serve his saving plans for other creatures: "The angels work together for the benefit of us all" (St. Thomas Aquinas, STh I, 114, 3, ad 3).

351 The angels surround Christ their Lord. They serve him especially in the accomplishment of his saving mission to men.

352 The Church venerates the angels who help her on her earthly pilgrimage and protect every human being.


I confess, however,  that I did not give them much thought until the icon came into my life.  And yet, when you consider scripture and the teachings of the Church, it is apparent that we should  and indeed must re-discover the importance of angels in our spiritual life.   Indeed,  as Benedict XVI  reminded us a few years ago (2nd October 2011, on the Feast of the Guardian Angels) : 'Dear friends, the Lord is always near and active in human history and follows us with the unique presence of his angels, that today the Church venerates as ‘guardian’; in other words, those who minister God’s care for every man. From the beginning until death human life is surrounded by their constant protection.’

The Sacred Heart is about God’s desire to have a personal relationship – a heart to heart relationship – with us as individuals.  Jesus is ‘God with us’, Emmanuel.  The  presence of the angels in the icon serves to remind us that God is near us, and walks with us: hence we all have a kind of messaging or communications system we call our ‘guardian angels’.    Sitting on the underground it is amusing to see practically everyone playing with their phones and tablets. I plead guilty to this addiction. And there is something really annoying about not being able to send and receive emails and texts and all the rest of it deep underground.  But angels go where wifi is unable to tread.  My phone does not work on the underground, but my angel does – if only I am open to his messages, as the ‘texts’ that God is sending us. I should check my angelic texts and emails as much as I do my electronic messages.  I should be as aware ( actually, of course, more aware) of heavenly space as I am cyberspace!

Angels, it seems to me, are ways of understanding how close and personal God really wants to be: if only we are open to His message and His Word.  God's love fills and pulls all creation: and yet He wants a deeply personal relationship with us, as individuals.   God is cosmic and yet personal. Infinite and yet humble enough to enter into His creation as a baby. God’s Word is always available, however deep in the earth or how high in the sky we are! If we are not getting the message it is because we are not open and listening.  The love of God energises all creation: in Dante's words it 'moves the sun and all the other stars'.  Thus when we pray we join with the angels who are working throughout this creation.  When we are open to the Word, and the Word is in our hearts, we become messengers, like the Angels.  We walk with the Lord.  We walk in the presence of the Lord of Hosts.  The angels of special relevance for the Sacred Heart are the Seraphim and Cherubim: they are the angels closest to the Sacred Heart of Jesus seated on the throne of God.  As I have noted elsewhere on this blog, it is odd that, despite the prominence of the Seraphim in St. Margaret Mary’s account of her experiences, they hardly ever feature in representations of the Sacred Heart. Go HERE   and  HERE . 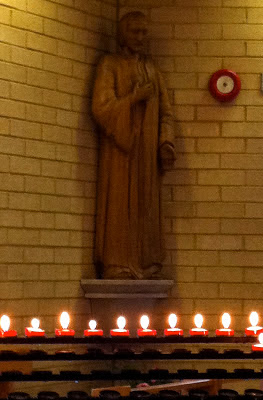 Saint Margaret Mary – in her autobiography - writes about forming an association with the Seraphim so that together they might perpetually praise the Divine Heart.  Thus, as we share in the body and blood of Christ and as we kneel in the presence of the Blessed Sacrament we must think of how we are actually joining with the angels closest to the ‘Sacred temple of God’, the ‘ tabernacle of the Most High’ and the ‘burning furnace of  charity’  ( as the Litany describes the Sacred Heart). In praying to the Sacred Heart we join with the ‘Burning ones’ aflame with the Love of God, in singing ‘Sanctus, Sanctus, Sanctus’ *  The devotion to the Sacred Heart is therefore a kind of association with the burning ones. In living a life in which the Sacred Heart is the centre of our existence, we walk with the angels, and they with us.  We share the same purpose: to set creation on fire with the Love of God.

So, looking for angels this morning – the first Friday of the month-  I found I was more open to their presence as a result of meditating on the angels in the icon.  Angels in scripture often appear – like Raphael – in an unexpected form.   As I  looked at the wooden statue of the Sacred Heart in my church this morning I did not see the Seraphim, but I did notice that alongside is a fire-alarm!  I wonder if that was intentional?  We pray that our hearts will be set  aflame with the love of God and to be consumed by this love.  From now on I have a feeling that the fire alarm will serve to remind me that (like St, Margaret Mary)  we offer our prayers to the Heart of the Saviour  in association with ‘the burning ones’.   Thus it it has been a working week which was about looking for angels, but instead, surprise, surprise,  what I actually found was  a fire alarm.  Or does it just look like a fire-alarm?

"The name 'Seraphim' does not come from charity only, but from the excess of charity, expressed by the word ardor or fire. Hence Dionysius .. expounds the name 'Seraphim' according to the properties of fire, containing an excess of heat. Now in fire we may consider three things. "First, the movement which is upwards and continuous. This signifies that they are borne inflexibly towards God. "Secondly, the active force which is 'heat,' which is not found in fire simply, but exists with a certain sharpness, as being of most penetrating action, and reaching even to the smallest things, and as it were, with superabundant fervor; whereby is signified the action of these angels, exercised powerfully upon those who are subject to them, rousing them to a like fervor, and cleansing them wholly by their heat.
"Thirdly we consider in fire the quality of clarity, or brightness; which signifies that these angels have in themselves an inextinguishable light, and that they also perfectly enlighten others."