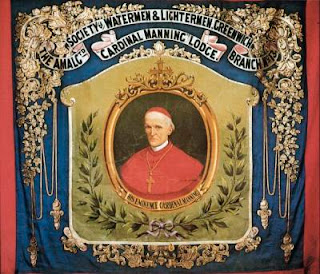 As Catholics all over the world pray for the Holy Spirit to guide the choice of Benedict’s successor, I am minded once again to turn to Cardinal Manning (1808-1892) – someone whose reputation has been very much in the shadow of Newman.   Manning was, however, a highly respected and much loved man.  His funeral brought out one of the largest crowds ever recorded in London in the 19th century.  Manning was, of course, a deeply spiritual person, but he was also prepared to get involved in the big social and economic problems of his day.  He was always on the side of the underpaid, exploited and the poor and critical of the capitalist economic system of the day.  Indeed, he was an influential figure in the development of Catholic social teaching that was first expressed in Pope Leo XIII’s Rerum Novarum.  He was passionate about the importance of fair pay and worker’s rights.  He had a defining impact on the thinking of Belloc and Chesterton and on their development of  the idea of ‘distributivism’.  ( An idea which is still of relevance today !)   What powered or energized this man?  Well, it is not so surprising that it was his devotion to the Sacred Heart.   In Manning we find how vital is this relationship between the ‘most perfect devotion’ of the Church and the challenge of building a 'civilization of Love'. Manning is an example of the kind of wisdom which is so necessary in the Church today: a concern for social justice which is founded and grounded in a devotion to the Sacred Heart.   The renewal of the Church in the face of all the internal problems and external threats  must come about through a re-discovery of the passion of Manning for  social justice which springs and flows from the Heart of the Saviour.

In the light of earlier posts, just a quote which I think is a perfect reflection to bring to this image of the Sacred Heart. 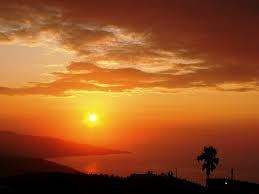 Throughout the whole world, from sunrise to sunset for in the Kingdom of Jesus the sun never goes down the Sacred Heart is worshipped day by day. When the tapers on the altar are lighted for the Holy Mass in our morning, in other regions of the world they are being kindled on the altar for the evening Benediction. And as the sun goes round the world, in the language of men, opening the day, the Holy Mass follows it, and Benediction comes after in its train. Everywhere  Jesus is upon the altar, in the tabernacle, under the  canopy of the world -wide Church; and there are  millions upon millions, and myriads of millions, adoring Him in perpetual worship, and saying, ' Sanctus, Sanctus, Sanctus ; Holy, Holy, Holy, Lord God of Sabaoth ; heaven and earth are full of Thy glory. Hosanna in the highest. And that worship upon earth mingles with the  worship of heaven. For before the throne there are Saints and Martyrs, and Angels and Archangels,  and dominions and principalities and powers, and  virtues and thrones, and Cherubim and Seraphim ; and in the splendour of eternal glory all created  things are casting their crowns of gold before the  Sacred Heart of Jesus, saying, ‘ Worship and glory  and thanksgiving and wisdom and praise be unto  Him that sitteth upon the throne.' The Sacred Heart of Jesus to all eternity will be adored, in the glory of God the Father.


More than ever before, this Lent the Church - from the very top to the very bottom-  needs to return with a sense of urgency to the devotion to the Sacred Heart and  humbly pray ' Sacred Heart of Jesus, have mercy on us.' Now, with the church in crisis and  flux we must place ALL our  trust in the loving and merciful Heart of Jesus.  The Church must look outwards to the problems of a deeply materialistic and secular world and draw all its strength from energy of God's love that radiates from the very heart of God. 19th century London was fortunate in having a leader like Cardinal Manning who understood the problems of his day and also understood how solving those problems required us to be close to the Heart of Christ.  We so badly need people in the Church today  who have  - like Manning - a vision of the Sacred Heart at the heart of the Church's mission.