Welcome to the Cherubim and their many eyed wheels! 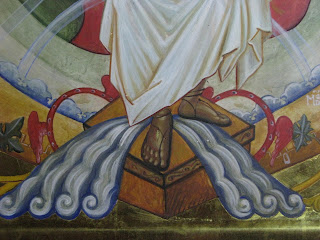 Because the Sacred Heart  is a devotion  which is so focused on an image, how we make sense of the image is crucial to the prayer life it fosters.    The theme of seeing is a major one in Teilhard’s writings on the Sacred Heart.  Teilhard believed that we had to see this very familiar Catholic images in a different way: he wants us to see it less in terms of the  Botoni type images, and more in terms of light and energy.  His Sacred Heart is a golden glow.   Reflecting on the Redon images the other day  it struck me that we have to be open to the various stages and phases in the evolution of the image.   As we reflect on the earliest representations  and the more recent explorations – such as our icon  - I do not think this means that we have to abandon seeing the Sacred Heart through these other representations.   To  understand the Sacred Heart it is necessary to be aware of  the evolution or the unfolding of the image.  And with that in mind, I turn to a part of the icon which I have yet to explore : the Cherubim  that  we find at the bottom of the picture.  When we look at the Cherubim (represented here by their wheels of the chariot of God)  we notice that their wheels - or the Ophanim - are covered by eyes.*   For a icon which is about an image which embodies the old and the new aspects of the Sacred Heart the presence of the Cherubim (with their 32 eyes) and their wheels ( the many eyed Ophanim) are  very welcome indeed.  We need all the eyes we can get!  So, if I haven’t said it before: good to see you Cherubim. Welcome.   I think that the Cherubim  and their  many eyed wheels will help us to see the Sacred Heart more clearly  and love it more dearly.
What are usually called Cherubim are, of course, ‘putti’ and are certainly not to be mistaken for Cherubim!   Putti are the ‘cute’ little boys who, despite their chubbiness manage to  fly around all over Renaissance, Mannerist, Baroque and Rococo paintings conveying the sense of ‘love’.  The Cherubim are many things, but cute, and like putti, no they are not! 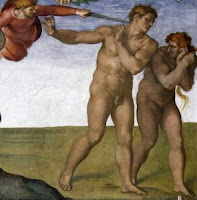 We first meet Cherubim in Genesis.  Poor old Adam on the far left of our icon must feel  uncomfortably close to the Cherubim for they remind us that when he and Eve were thrown out of heaven it was the Cherubim who were posted outside the gates to make sure that he they did not try to get back in! (Genesis 3:24) As I read it, if Adam and Eve had not eaten the forbidden fruit they might well have ended up as Cherubim: attending on the Deity in the garden.


Here in our icon they are angels whose task it is to serve as bearers of the throne of God ( as well as guarding the Sacred Heart as the ‘gate of Heaven’ ) .  The Cherubim are the angels who transport God around His creation.   Most famously they appear in Ezekiel where they are described in some detail. They are portrayed as having four faces which represent different realms  or aspects of nature: lion ( nature  as wild-life) an Ox ( as domestic animals); eagle ( the air) and finally the face of a man (homo sapiens) .  These four angels with four faces each are all joined together  spinning around on  wheels on fire  (the many eyed Ophanim) .  There have been numerous attempts to try and represent the description we find in Ezekiel.  But what they all have in common is their attempt to capture the sense of the Cherubim as a powerful whirlwind of energy and driven by the power  the Ophanim  - the  wheels within wheels which are covered with eyes ‘like burning coals of fire’.    Perhaps one of the most famous attempts to illustrate Ezekial ( 14-28) is by Blake: ‘The Whirlwind: Ezekiel’s  Vision of the Cherubim and Eyed Wheels’.
In terms of a more iconographic representation, the one which well captures the sense of whirling energy of the Ophanim is to be found in the Church of St. John the Baptist in Kratovo (pictured on the right) .  (See HERE)
There is much that can be said about our Cherubim and Ophanim which are bearing the throne of Christ Omega, but for this blog it is enough to say that they do two main things (I think).  The first is that they remind us of three of the litanies of the Sacred Heart in particular.
Heart of Jesus, Holy Temple of God.
Heart of Jesus, Tabernacle of the Most High.
Heart of Jesus, House of God and Gate of  Heaven.
It is the Cherubim who were used to adorn the Ark of the covenant, and they adorned the Temple in Jerusalem.  So, they serve to remind us that Jesus is the new Covenant.; the Temple Of God; the Tabernacle of the Most High; and , of course,  the responsibility of the Cherubim is also to guard the House of God and the Gates of heaven  - and that is how the Sacred Heart is described in the litany.  So, once again, the icon serves to connect the Sacred Heart with its scriptural context:  the Cherubin provide as with a window through which we can reflect on those three litanies.  And, of course, their presence in an icon of Christ Omega - a Sacred Heart of the Parousia -  reminds us that the Cherubim appear in the Book of Revelation (4.6). Thus our icon is shown as rooted in scripture and thereby provides a doorway into exploring the wider theological and Biblical context of the Sacred Heart.  (As the summa of our faith.)  Above all the four heads of the Cherubim also connect our thoughts and prayers with the four gospels as they represent the signs of Mathew ( winged man)  Mark, (lion)  Luke, (ox).and John (eagle). ( I try, for example,  to reflect on the idea of the 'heart' in the Gospels when I use this icon.)
Secondly, the Cherubim  also have so much to contribute to our understanding of the Sacred Heart from a teilhardian perspective.  The Cherubim and their Ophanim are, I think, yet another key to opening up and expanding our understanding of the Sacred Heart  that Teilhard found in St. Paul and St John.  But that is another blog!  At least I have now introduced the Cherubim and their many eyed wheels ......there is a lot more to be said. **

=============
* One authority explains that  ophanim are often seen as the 'thrones' mentioned in St. Paul : 'The 'thrones'; also known as 'ophanim' (offanim) and 'galgallin', are creatures that function as the actual chariots of God driven by the cherubs. They are characterized by peace and submission; God rests upon them. Thrones are depicted as great wheels containing many eyes, and reside in the area of the cosmos where material form begins to take shape. They chant glorias  to God and remain forever in his presence. They mete out divine justice and maintain the cosmic harmony of all universal laws.' Rosemary Ellen Gullen, Encyclopaedia of Angels, Facts on File, 2004


**Meanwhile...There is so much wonderful music written concerning the Cherubim. One of my favourite pieces is Tchaikovsky's  hymn of the Cherubim.  Listen HERE.

As to the wheels, let us not leave them out.  Great song  ( sang it in the choir when I was a kid ) 'Ezekiel Saw That Wheel'.  Here it is sung by ( who else but) Woody Guthrie: HERE