Reflecting a little more on Teilhard’s story ‘The Picture’ about which I blogged  earlier, (HERE)  I have been musing about what artist – if any – has explored the Sacred Heart in the kind of way we find in Teilhard’s story.  And my mind has been drawn more and more to the Sacred Heart by by the French Symbolist  artist, Odilin Redon ( 1840-1916).   I  doubt if Redon can be said to be expressing a particular 'Catholic' idea of the Sacred Heart.  His own spirituality was what we might now term somewhat 'new age'   - he had an interest in Eastern religions and he was also fascinated about the relationship between evolution and religion.  His work is full of reflections on evolution.  But what is of interest here is the fact that we can see what a 'symbolist' made of the most popular image in French Catholicism during the late nineteenth and early twentieth century.   He was not the least interested in politics, at the time when the Sacred Heart was a very political symbol in France, but it is clear that he wanted to see the Sacred Heart in a very different way to its traditional naturalistic representations. So his images did challenge an important convention.    The images he produced stand in complete contrast to the naturalistic 'Botoni' type that dominated - and still dominate - and  can be read as attempts to look at the symbol in a radically different way.  His exploration of the symbol of the Sacred Heart has, therefore, some relevance to our journey to the Sacred Heart. 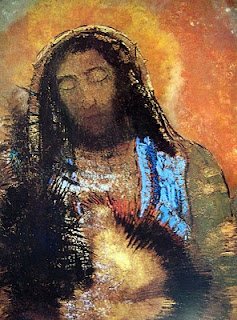 Redon's picture (completed in 1910 ) shows us a Sacred Heart which has something in common which the later picture painted by Henri  Pinta (1921)  (< - left) also captured for  Teilhard: the heart as a golden diaphanous glow.  The heart for Redon is seen as  a glow of light and radiating (cosmic) energy. As with the Pinta image, therefore,  in Redon's pastel we see a  picture of Christ in terms Resurrection and Transfiguration.   The sense of the Sacred Heart is conveyed by the use of black spikes ( with red tips around the ‘heart’ ) and they suggest the crown of thorns around the head. **   Traditionally the Sacred Heart is shown looking directly at the viewer.  But Redon had a preference for heads drawn or painted in profile or with the eyes closed. The closed eyes also convey a sense of the humility of Christ: Jesus who is humble and meek of heart.   It suggests to me that  that we too must close our eyes and reflect humbly upon our own hearts. Here we see Christ who is not looking at us, but is deep  in contemplation and prayer – and I find that it invites me to close my eyes and pray.  As in Teilhard’s story we see a Christ whose image is in the process of loosing its defined outline.  We get a sense of Christ as in the process of being consumed but also consuming and of infolding and converging.  Another feature which is quite subtle, but again echoes what we find in Teilhard is the sense of the Sacred Heart as involving a process of 'centering'. The 'spikes' coming out of the heart are curving and  point our eyes towards the outer circle surrounding the nimbus around Christ's head - which is surrounded by a mysterious black circle.  The whole composition seems to have a sense of swirling movement, pulling us in to the mystery the Sacred Heart.    I find it a most compelling image. 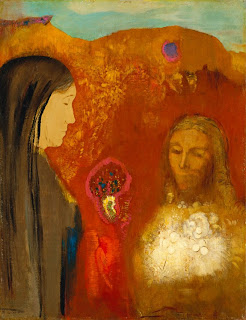 Another picture by Redon  (dated c 1900) that also explores the symbol of the Sacred Heart,  entitled ‘Christ and the Samaritan Woman’, and is subtitled 'The White Bouquet'  shows Christ’s heart like a bouquet of flowers formed from bubbling and glowing  liquid light, as he tells her that he is the ‘living water’.   The heart here is being offered as a beautiful bouquet of flowers rather than a literal heart. *** The Samaritan woman is shown facing Christ with her eyes closed.   It is as if she is reflecting on the meaning of what  Jesus has told her: that he is the living water.  He is the source of a spring of life-giving water that flows from His heart. And between them is a glowing red (heart) shape sparkling with blue and gold which perhaps symbolises how, in prayer and contemplation of that mystery, her heart and the Sacred Heart of Jesus are in the process of entering  into a new relationship of love.  Heart is speaking to heart.   As with his Sacred Heart picture above,  we get a sense of movement with the circles within circles: the flowery heart appears to be comprised of discs of light moving in and around one another.  And again, as with the  Sacred Heart picture - but even more so - we see Christ without border lines.  As in Teilhard's story, Christ is melting, emerging and unfolding.  In this picture Christ is 'flowering'.  Contrast Christ with the woman.  She is very solid and static: whereas Christ is more of a golden glow than a solid or static body.


So for me the pictures by Redon are very evocative of  Teilhard, but they also evoke the litanies of the Sacred Heart, especially:

I think the Redon's Sacred Heart picture prompts us to reflect on the Sacred Heart as the dynamic  'Furnace' of God's love that we find in Teilhard's story.  And the picture of  'Christ and the Samaritan woman' invites us to think of the Sacred Heart in terms of a different and opposite symbol : not just as fire but as the source of  living water.  God's love as a flowering or unfolding within us brought about by his living water flowing through our heart.   In turn, these ideas take me back to our icon of Christ Omega where Ian has thoughtfully included both the symbol of fire at the centre of the icon, but also the symbol of flowing living water which is nourishing the unfolding and flowering  of  God's love in our heart. ( The picture  of 'Christ and the Samaritan Woman'  also reminds me of St Mary Magdelene in our icon. She is first to see Christ after the resurrection and she takes him for a gardener!  Perhaps, as St. Therese would expressed  it, Christ sees us all as his flowers.  )


===
* Redon once said' With my eyes more widely opened upon things, I learnt how the life that we unfold can also reveal joy.'  This idea of life as a process 'unfolding'  is very much present in the picture.
**This is marked contrast to the picture of Buddha which is very similar to his drawing of the Sacred Heart.
***  The notes on the picture at the Stadel Museum in Frankfurt am Main states ' The artist painted the incident reported in the Gospel of John, in which Jesus asks a Samaritan woman for water, on two occasions. This later version was probably painted in the late 1890s, in the second phase of Redon’s career, in which he focused on colour. In an unreal, swirling play of colours, the silhouettes of the two figures merge with the reddish-brown background. The white bouquet (which is also the painting’s subtitle) shines with a glittering, mystical light in front of Jesus’ breast'
Posted by DWP at 14:35