St Gabriel:the angel who knocks on the human heart. 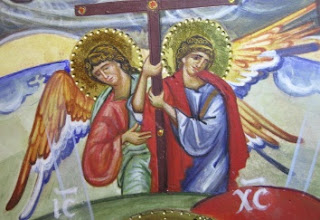 We must not go any further without exploring the role of Gabriel in the icon.  He too has much to say to us and provides a good deal of food for our thought and prayer.

As we look at the image of St. Gabriel (in green) next to St. Michael we are reminded of the part which he has played in defining moments throughout the Old and New testaments.  Here in the icon Gabriel looks down on the Blessed Virgin  and St. John the Baptist and we cannot but think of the central role he plays in the Bible as God's messenger for VIP messages.

Pope  Benedict XVI gives us a wonderful passage in a homily (given in 2007 on the occasion of the ordination of six  bishops) which is an absolutely perfect aid for reading this part of  our icon of the  Sacred Heart.  It says it all really.

We meet the Archangel Gabriel especially in the precious account of the annunciation to Mary of the Incarnation of God, as Luke tells it to us (1: 26-38). Gabriel is the messenger of God's Incarnation. He knocks at Mary's door and, through him, God himself asks Mary for her "yes" to the proposal to become the Mother of the Redeemer: of giving her human flesh to the eternal Word of God, to the Son of God. The Lord knocks again and again at the door of the human heart. In the Book of Revelation he says to the "angel" of the Church of Laodicea and, through him, to the people of all times: "Behold, I stand at the door and knock; if any one hears my voice and opens the door, I will come in to him and eat with him, and he with me" (3: 20). The Lord is at the door - at the door of the world and at the door of every individual heart. He knocks to be let in: the Incarnation of God, his taking flesh, must continue until the end of time. All must be reunited in Christ in one body: the great hymns on Christ in the Letters to the Ephesians and to the Colossians tell us this. Christ knocks. Today too he needs people who, so to speak, make their own flesh available to him, give him the matter of the world and of their lives, thus serving the unification between God and the world, until the reconciliation of the universe. Dear friends, it is your task to knock at people's hearts in Christ's Name. By entering into union with Christ yourselves, you will also be able to assume Gabriel's role: to bring Christ's call to men.
(See here for original text.)

In the same homily the Pope has this to say about the role of angels:

Sacred Scripture and the Church's tradition enable us to discern two aspects. On the one hand, the Angel is a creature who stands before God, oriented to God with his whole being. All three names of the Archangels [ Michael, Gabriel and Raphael] end with the word "El", which means "God". God is inscribed in their names, in their nature. Their true nature is existing in his sight and for him. In this very way the second aspect that characterizes Angels is also explained: they are God's messengers. They bring God to men, they open heaven and thus open earth. Precisely because they are with God, they can also be very close to man. Indeed, God is closer to each one of us than we ourselves are. The Angels speak to man of what constitutes his true being, of what in his life is so often concealed and buried. They bring him back to himself, touching him on God's behalf. In this sense, we human beings must also always return to being angels to one another - angels who turn people away from erroneous ways and direct them always, ever anew, to God.

There is far more to say about Gabriel and angels , but I think that Pope Benedict's words capture all of what I want to say - except more elegantly and more concisely.   ( Just a little footnote, perhaps: when Benedict says  '...thus serving the unification between God and the world, until the reconciliation of the universe..' is he showing his 'inner Teilhard' again!?)
Posted by DWP at 15:39