Back to the Angel with the measuring rod! 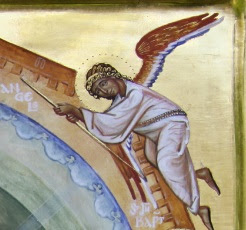 the angel carrying a measuring line from the Book of Revelation (Rev 21:15), measuring out the new Creation, principally the new Jerusalem. This reminds us of the profound order within Creation which will continue and be fulfilled in the new.

I should, of course, continue with the deisis by considering the image of the Mother of Christ on the left. But the Angel just above St John has some interest for us Teilhardians! The Sacred Heart as depicted here is very much inspired by St. Paul’s idea of the Parousia. In the epilogue to the Divine Milieu Teilhard expresses a hope that humanity will realize that we are not simply a product of evolution, but are called to work with Christ in building the earth: to Christify creation. We are called to build the earth : we are called the build a new creation in Christ. We are called to build the Jerusalem which will reach its fullness – its Pleroma – in the final Parousia when Christ becomes all in all. This needs faith in the future and faith in the capacity of humanity to help complete the creation.


Extracts from the Divine Milieu:

One day, the Gospel tells us, the tension gradually accumulating between humanity and God will touch the limits prescribed by the possibilities of the world. And then will come the end. Then the presence of Christ, which has been silently accruing in things, will suddenly be revealed -like a flash of light from pole to pole. Breaking through all the barriers within which the veil of matter and the water-tightness of souls have seemingly kept it confined, it will invade the face of the earth. And, under the finally- liberated action of the true affinities of being, the spiritual atoms of the world will be borne along by a force generated by the powers of cohesion proper to the universe itself, and will occupy, whether within or without Christ ( but always under the influence of Christ), the place of happiness or pain designated for them by the living structure of the Pleroma. …. Like lightning, like a conflagration, like a flood, the attraction exerted by the Son of Man will lay hold of all the whirling elements in the universe so as to re- unite them or subject them to his body.
…
This is our faith and our hope: that in Christ we build a new creation. In Christ we are completed. In Christ the universe is completed. But we have allowed the flame of faith and hope in the Cosmic Christ completing creation to to die down in our sleeping hearts. No doubt we see with greater or less distress the approach of individual death. No doubt, again, our prayers and actions are conscientiously directed to bringing about the coming of God's kingdom.
…
The flame must be revived at all costs. At all costs we must renew in ourselves the desire and the hope for the great Coming. But where are we to look for the source of this rejuvenation? We shall clearly find it, first and fore- most, in an increase of the attraction exercised directly by Christ upon his members. And then in an increase of the interest, discovered by our thought, in the preparation and consummation of the Parousia. And from where is this interest itself to spring? From the perception of a more intimate connection between the victory of Christ and the out- come of the work which our human effort here below is seeking to construct.
...
Those of us who are disciples of Christ must not hesitate to harness this force, which needs us, and which we need. On the contrary, under pain of allowing it to be lost and of perishing ourselves, we should share those aspirations, in essence religious, which make the men of today feel so strongly the immensity of the world, the greatness of the mind, and the sacred value of every new truth. It is in this way that our christian generation will learn again to expect.

We have gone deeply into these new perspectives: the progress of the universe, and in particular of the human universe, does not take place in competition with God, nor does it squander energies that we rightly owe to him. The greater man becomes, the more humanity becomes united, with consciousness of, and master of, its potentialities, more beautiful creation will be, the more perfect adoration will become, and the more Christ will find, for mystical extensions, a body worthy of resurrection. The world can no more have two summits than a circumference can have two centres. The star for wluch the world is waiting, with- out yet being able to give it a name, or rightly appreciate its true transcendence, or even recognise the most spiritual and divine of its rays, is, necessarily, Christ himself, in whom we hope. To desire the Parousia, all we have to do is to let the very heart of the earth, as we christianise it, beat within us.


Men of little faith, why then do you fear or repudiate the progress of the world? Why foolishly multiply your warnings and your prohibitions? 'Don't venture…. Don't try…everything is known: the earth is empty and old: there is nothing more to be discovered.' We must try everything for Christ; we must hope every- thing for Christ. Nihil intentatum. That, on the contrary, is the true christian attitude. To divinise does not mean to destroy, but to sur-create. We shall never know all that the Incarnation still expects of the world's potentialities. W e shall never put enough hope in the growing unity of man- kind.
Jerusalem, lift up your head. Look at the immense crowds of those who build and those who seek. All over the world, men are toiling-in laboratories, in studios, in deserts, in factories, in the vast social crucible. The ferment that is taking place by their instrumentality in art and science and thought is happening for your sake. Open, then, your arms and your heart, like Christ your Lord, and welcome the waters, the flood and the sap – of humanity . Accept it, this sap-for , without its baptism, you will wither, without desire, like a flower out of water;and tend it, since, without your sun, it will disperse itself wildly in sterile shoots.

Thus the New Jerusalem being measured by the Angel has to be built out of the toil of human effort and action. It will completed and brought to its fulfillment in Christ. So, when I reflect upon that angel with his measuring rod, I have to reflect on what I have done to build the Kingdom of Heaven. The Sacred Heart calls us to be participate in building the New Jerusalem – wherever we are or whatever we do. Of such bricks the walls of jasper will be made. Of such efforts will the city of gold as clear as glass will be fabricated. Of such precious and beautiful minerals will the foundations be laid and the walls adorned. And we can help to build the new creation ( US, not the Angel who only measures it!) when we ‘let the heart of the world ..beat within us’! Above all ' We must try everything for Christ; we must hope every- thing for Christ.' since Jesus calls us to ' Open, [our] arms and [our] heart (s) , [like HIM] and welcome the waters, the flood and the sap – of humanity.' When we do this we are building the New Jerusalem being measured by the Angel.