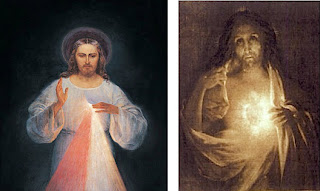 Today is the second Sunday of Easter or Divine Mercy Sunday. It is also the day on which John Paul II has been beatified. It is fitting that the beatification should take place on this day as he was a great supporter of the devotion which developed out of the experiences of a Polish nun, St Faustina Kawalska, between 1930- 1938. In 1959 the Church expressed its concerns about the dissemination of the image and the devotion, and the reversal of this position came about largely through the efforts of the then Karol Wojtyla, Cardinal Archbishop of Cracow. In due course Blessed John Paul II established today’s feast in 2000 on the occasion of the canonization of St. Faustina. Five years later - on the eve of the feast of the Divine Mercy whilst vespers were being said in preparation for the following day - Blessed John Paul died. Given this, his beatification today is wholly appropriate. Blessed John Paul stated that:

"The Message of Divine Mercy has always been near and dear to me… which I took with me to the See of Peter and which it in a sense forms the image of this Pontificate."

Dr. Robert Stockpole - director of the John Paul II Institute of Divine Mercy - (GO HERE ) has argued that ’the Sacred Heart and the Divine Mercy devotions are theologically inseparable and complementary,’ but they are definitely not ‘identical’. He explains:

the mercy devotion, to a great extent, is a further development, a further unfolding, of that tradition of Heart-Spirituality that comes to us from St. John Eudes and St. Margaret Mary Alacoque.  Devotion to the Sacred Heart may be defined as the worship and service of the Second Person incarnate of the Holy Trinity, Jesus Christ, because of His love for us, symbolized by His pierced and wounded Heart of flesh. Devotion to The Divine Mercy, on the other hand, may be defined as the worship and service of the Triune God, because of His merciful love for us, poured out through the Merciful Heart of Jesus, and symbolized by the rays that stream from His breast in the Mercy Image. The centrality of the Heart of Jesus in both devotions is clearly evident. ….In short, the differences between these two devotions are best described as differences of emphasis, for both spring from a common source: devotion to the same Heart of Jesus, overflowing with merciful love for us. (See his discussion in full here .)

Given the nature of this project at this point I think all I can do is reflect upon the images themselves and how they can complement one another. To that end today I have begun a Novena to the Mercy of God (SEE HERE), I will say the Chaplet of Mercy ( SEE HERE ) and the three o’clock prayer (SEE HERE ) . Let me see what emerges. It is clear that from what both Blessed John Paul and Pope Benedict have said, the devotions to the Sacred Heart and the Divine Mercy should be central to our spiritual lives, and so it is fitting that I should begin my exploration of the two devotions , and I ask Blessed John Paul to pray for me as I begin this novena

What I would say at the outset it that the emphasis on LIGHT in the image of the Divine Mercy is very relevant to the challenge of making an icon of the Sacred Heart inspired by Teilhard. The comparison with Teilhard’s Pinta image and that produced by Eugeniusz Kazimirowski in 1934 – under the direction of Saint Faustina - is one which would have appealed to and fascinated Teilhard. The image produced under direction of St. Faustina is such a radical departure from the Sacred Heart image. No heart, just light. Perhaps that is why it has become so popular. So I will keep these two images in mind and in my prayers for the next nine days. (When I was in hospital I was visited by a member of a local Catholic Church and she gave me a copy of the Divine Mercy image which I would use to aid my prayer. And I have to confess I thought of it as a Sacred Heart image. And most Catholics I would think do the same. But of course they are different and it is important to be clear about these differences. )

But, this focus on light is also something which enables me to connect with Ian's work on the Mysteries of Light ( or Luminous Mysteries) . Again, it is fitting that Ian is working on the Mysteries of light - which was introduced by John Paul (in 2002) to supplement the existing mysteries of the Rosary. (Glorious, Joyful, Sorrowful) The Mysteries of Light , begin in the Jordan (-where Ian now is!) :The Baptism in the Jordan; The Wedding at Cana; The Proclamation of the Kingdom; The Transfiguration;The Institution of the Eucharist. Perhaps through this mystery I can connect Teilhard, with the Sacred Heart and Divine Mercy and Ian's work in Anjara, Jordan? Let us see: Jesus I Trust in You.
Posted by DWP at 10:39