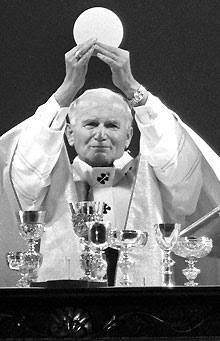 On this special day when we honour a truly great and holy man, I cannot resist quoting what Blessed John Paul said about Teilhard:

"The Eucharist is celebrated in order to offer on the altar of the whole earth the world's work and suffering in the beautiful words of Teilhard de Chardin," in his book Gift and Mystery, On the Fiftieth Anniversary of My Priesthood, 1996.

And later in his great encyclical on the Eucharist ( Ecclesia de Eucharistica) - published in 2003 - Blessed John Paul used quite explicit Teilhardian language to convey his message.

'.When I think of the Eucharist, and look at my life as a priest, as a Bishop and as the Successor of Peter, I naturally recall the many times and places in which I was able to celebrate it. I remember the parish church of Niegowić, where I had my first pastoral assignment, the collegiate church of Saint Florian in Krakow, Wawel Cathedral, Saint Peter's Basilica and so many basilicas and churches in Rome and throughout the world. I have been able to celebrate Holy Mass in chapels built along mountain paths, on lakeshores and seacoasts; I have celebrated it on altars built in stadiums and in city squares... This varied scenario of celebrations of the Eucharist has given me a powerful experience of its universal and, so to speak, cosmic character. Yes, cosmic! Because even when it is celebrated on the humble altar of a country church, the Eucharist is always in some way celebrated on the altar of the world. It unites heaven and earth. It embraces and permeates all creation. The Son of God became man in order to restore all creation, in one supreme act of praise, to the One who made it from nothing. He, the Eternal High Priest who by the blood of his Cross entered the eternal sanctuary, thus gives back to the Creator and Father all creation redeemed. He does so through the priestly ministry of the Church, to the glory of the Most Holy Trinity. Truly this is the mysterium fidei which is accomplished in the Eucharist: the world which came forth from the hands of God the Creator now returns to him redeemed by Christ. " (My emphasis)

For me, that is what Teilhard is about. It is what the Eucharist is all about: it is nothing less than the Sacred Heart of the Cosmos.

The Encyclical ends so beautifully and reminds us that the sacrament - above all - calls to our hearts.

"In the humble signs of bread and wine, changed into his body and blood, Christ walks beside us as our strength and our food for the journey, and he enables us to become, for everyone, witnesses of hope. If, in the presence of this mystery, reason experiences its limits, the heart, enlightened by the grace of the Holy Spirit, clearly sees the response that is demanded, and bows low in adoration and unbounded love. "