Advent and the Sacred Heart

I return to the blog after a few months absence after realising yet another dimension of reflecting and reading and icon of the Sacred Heart.  This advent the icon has drawn me into reflecting  on the great 'O' Antiphons that are said/sung in the last seven days of Advent .These are the antiphons
chanted or recited before and after the Magnificat of Vespers.  Their name comes from the fact that they all begin with "O".  The antiphons focus on the names or titles of Jesus:
words:  Sapientia, Adonai, Radix, Clavis, Oriens, Rex, and Emmanuel.

In the middle ages it was discovered that, if you adjusted the order of the names you get  ERO CRAS (I will be, tomorrow). 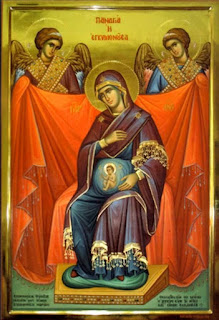 My advent reading of the icon this year have been aided by a fortuitous recommendation from a friend of a book by Oliver Treanor, Seven Bells to Bethlehem: The O Antiphons, Greenwing 1995.

Treanor begins the journey by focusing on the Blessed Virgin and the Magnificat. One point that I found instructive was the notion that the 'O' antiphons said/sung  before and after the Magnificat remind of her fullness as pregnant with the Son of God. This prompted me to reflect upon the many icons that as us to contemplate the image of pregnant - full of grace - Mary.  Many of these icons make use of very explicit O to remind us of the wonder of the incarnation, and the holiness of Mary.

We use the 'O' a good deal in a variety of contexts, and familiarity does breed contempt.  The antiphons, however, ask us to think far more deeply about 'O'.  And, as Treanor suggests images of a pregnant Mary help us in beginning the last stages of our advent journey.  Advent is in many ways a journey into this 'O'.  The Madonna of the 'O' expresses how Mary is full of God's grace, because she is not full of herself.  In her humility she magnifies God, and not herself.  So as we approach Christmas we have 'O'pen our hearts and minds and let the Christ child in.  When we say or sing 'O' we must try to become like Mary, and create that space wherin the Holy Spirit can dwell.   Each of the titles of the Messiah is an 'O' through which we must enter to make our journey.

Hence, of course, we begin with wisdom.  It also leads us to contemplate other icons, Mary as the seat of wisdom. Mary as the ark of the covenant, as the great exemplar of humility, and God bearer. Sapientia  and  humility have  been an important and recurring theme in my reading of this icon of the Sacred Heart ,  and with the great O antiphons, I find myself once again drawn into praying for humility and wisdom.

(O Wisdom that comest out of the mouth of the Most High,
that reachest from one end to another, and orderest all things mightily
and sweetly:  come to teach us the way of prudence.)


The antiphon of the 18th December also pulls me back into to reflecting on the fire  or furnace of love at the very heart of the icon.

(O Adonai, and Ruler of the house of Israel, Who
didst appear unto Moses in the burning bush, and gavest him the law in
Sinai, come to redeem us with an outstretched arm.)

O radix Iesse, qui stas in signum populorum, super quem continebunt
reges os suum, quem gentes deprecabuntur:  veni ad liberandum nos, iam
noli tardare.
(O Root of Jesse, which standest for an ensign of the
people, at Whom the kings shall shut their mouths, Whom the Gentiles
shall seek:  come to deliver us, do not tarry.)

(O Key of David, and Sceptre of the house of Israel, that openeth and no man shutteth, and shutteth and no man openeth:  come to liberate the prisoner from the prison, and them
that sit in darkness, and in the shadow of death.)

And in the light of these 'O's , the light and fire in the glow of the icon illuminates splendor of the King of the Universe who came into this world as a baby.

(O Dayspring, Brightness of the everlasting light, Son of justice:  come to give light to them that sit
in darkness and in the shadow of death.)

(O King of the Gentiles, and desire thereof, Corner-stone that makest of two
one:  come to save man, whom Thou hast made out of the dust of the
earth.)

And then as we near the stable and contemplate Mary and Joseph and the Christ child, we behold the great truth: he is God with us!

(O Emmanuel, our King and our Law-giver, Longing of the Gentiles, and salvation thereof:
come to save us, O Lord our God!)