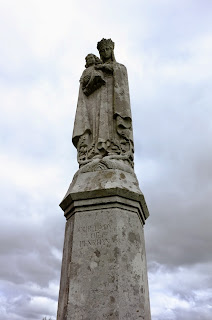 There are many holy and  sacred places in Wales - some of which find their way into guide books ( such as Nick Mayhew Smith's excellent book Britain's Holiest Places,  see here) , but there are some that are not so well known. One such is the the more scarred than sacred Marian shrine in the Rhondda Valley at Penrhys.  ( Read here. )  We went there on a pilgrimage yesterday and asked that ' the prayer of Mary find an echo in the life and heart of each one of us today'.  There could be no better way to spend a Sunday afternoon: the weather was kind and just as we started to sing 'I'll sing a hymn to Mary'  the clouds parted and the light shone down on us!  As we sang of being' sojourners in this vale of tears' and asked the 'Lily of the Valley' to pray for us, it was difficult not to remember the beautiful but sad valley in which the medieval shrine to Mary had once stood. 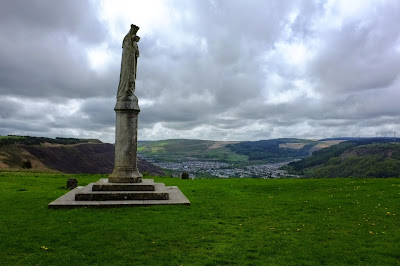 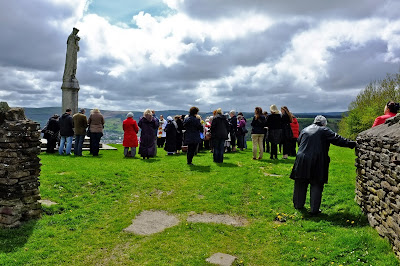 The Rhondda is such a inspiring place with its deep valleys and big open skies, but it is also a valley of tears.  I love it.  If you want to find the heart of Wales, come to 'Cwm Rhondda' . However, this is a wounded place: a place which was ripped apart by the search for black gold in the 19th and twentieth centuries.  It is a landscape which has been pierced and gutted by coal mining and is populated by communities in which we find some of the poorest and most disadvantaged people in Europe. But also some of the best and friendliest people in the world.

Before the service we took a short walk to the holy well ( Ffynon Fair or St. Mary's Well ) that overlooks the village of Llwynypia  and which once drew pilgrims from all over Britain to find it situated in a burnt and litter-strewn hill-side.  To me the water gushing out of the hill-side was kind of wound in the heart of this valley.   What was once a sacred place was now a scarred place littered with beer cans and much else besides.  It was not always so.  The shrine fell into decline during reformation: Thomas Cromwell himself ( that really nice man as (mis)represented in the openly anti-Catholic Wolf Hall!) ordered the burning of the wooden statue of the Virgin (1538) that was a focal point of the shrine established by the Cistertians. I admit that all I could think about was that this is a perfect place for a shrine to Mary, and just the right location for a holy well in 21st century Wales.  The statue of Mary holding Jesus looks out on a world which has been wounded and scarred by human beings who had (as Teilhard would put it) little 'sense of the earth' and was in the midst of a community that nowadays had little sense of God.  As we drove up to the shrine - which is over a thousand feet above sea level, we passed chapels and churches which had long been abandoned.  And yet, here we all were singing and praying and acknowledging the holiness of this once important shrine.   This gives us hope: for the valley of tears is recovering: but not fast enough.  The valley that was so grim and dark when I was a boy is now green again.  A place that once was without much hope is once again a beautiful place to be.  The scars are healing.  Just go there and see how beautiful it is!

If the Sacred, scarred and pierced Heart of Jesus has a landscape, it is here high in the wonderful hills of Penrhys.  Here we have an image of the humility of God and His love for all creation that one day will be united in Him.  But here we also have a scarred and wounded landscape from which a fountain of clear water flows.

As I stood there amidst the forget-me nots, brambles and blackened earth the words of the great hymn Cwm Rhondda came to me:
' Open thou the crystal fountain
Whence the healing stream shall flow' /'Agor y ffynhonnau melus
'N tarddu i maes o'r Graig y sydd.'

It was to that (remarkably still)  crystal sweet flowing water that we came  yesterday to bless ourselves as did Christians hundreds of years before.  Yes, I thought, if there was a shrine to the wounded heart of Jesus  from which living water flows in Wales, here it is at  Penrhys - Ffynon Fair, St Mary's Well. As always 'ad Jesum per Mariam' - To Jesus through Mary!

Looking out across the valley as we sang, in the distance I could see a large wind farm that was harnessing the winds that blew in our faces and carried our voices across the hills into Tylorstown .  Once this valley had been the source of the fires that had powered an industrial revolution.  Now it was being used to harness the winds.  The statue of the Blessed Virgin holding the infant Jesus now looks out upon these great turbines.  With that, the words of Teilhard came to my mind, and I smiled just as the sun broke through the clouds:

Once the Rhondda had harnessed the energy contained in coal for the world.  We can  only pray that 'quelque jour', one day, one beautiful day, the statue of Our Lady of Penrhys will look out on a world that is harnessing, for God,  the energy of love from the hearts of humanity.