The Sacred Heart in Lichfield


One thing I remember Ian telling us when we received the icon was that it would change our house.  And that proved to be so very true. It has a ‘living’ presence.  By living I mean that it has this way of catching and attracting light that never ceases to surprise.  I can think of no other kind of art that does this!  An icon seems to change and re-order the space around it.  So, living without the icon is rather odd.  We have a copy, but that is not quite the same.  From experience I find it is quite impossible to take a picture of an icon. No photograph can capture the way it ‘moves’.  So, we really miss it!


With the icon now in the beautiful city of Lichfield I wonder if there are any pre-reformation  images that are concerned with the heart of Jesus in the Cathedral – or the wounds of Christ more generally. I did not see any.  So, when I return I will have another good look around.  Of course, there are remnants of the devotion to the Sacred Heart  - and the four other wounds of Christ scattered all over Churches in the UK – little bits here and there that the iconoclasts of the reformation overlooked!  (Most often, I think, in roof bosses (left) and private devotional material. Or, in images that survived being whitewashed - as in the image of St Thomas in St. Alban's Cathedral - above right.) 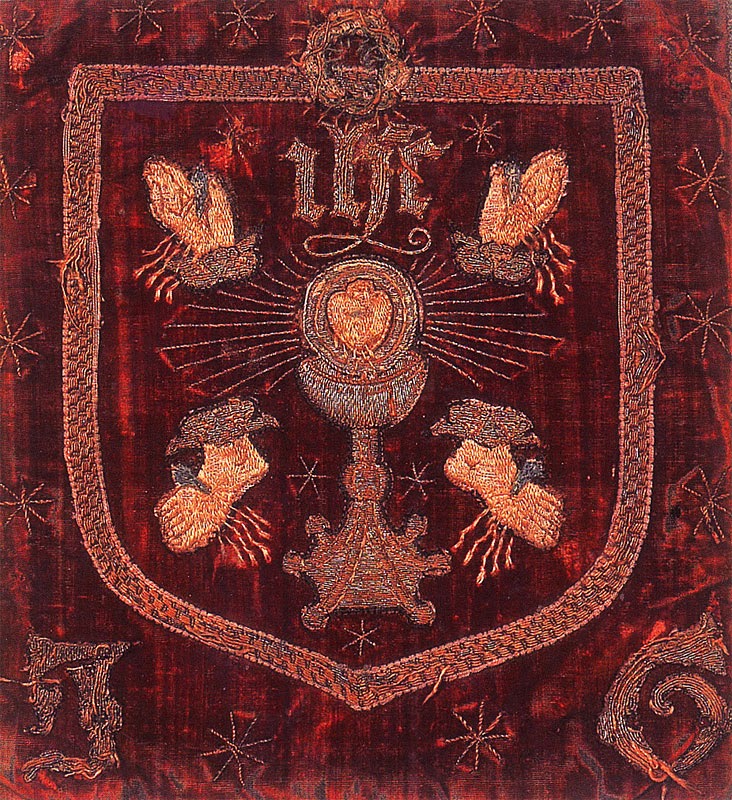 As is well-known, the image of the five wounds was the badge and colours of the rebels opposed to Henry VIII’s break with Rome  in the ‘Pilgrimage of Grace’, 1536 . No doubt this political use of the wounds of Christ meant that it was not to be an image which was subsequently to adorn the Churches of the reformed ‘Church of  England’.  It was clearly viewed as the dangerous image of the 'old religion'.

And yet, although images of the five wounds fell out of favour,  the symbol of the open heart remained central in the prayers, hymns and liturgy of the reformed and other traditions. * Therefore, I pray that the icon in Lichfield is not seen as a strange Catholic image, but one which can serve to remind all who view it of the fact which was central to the Fathers, Doctors , saints and mystics of the early Church: ‘By His wounds, you have been healed’ (Peter, 2:24).  May it serve to remind all who see it that the Risen Christ made himself known to his disciples by His wounds (John. 20:20).  Thomas, we recall,  would only believe until he had placed his hand into the Saviour’s wounded side (John 20:24-9).  Thus a devotion to the Heart of Christ is a devotion that should help to heal the wounds of a still divided  and wounded Christianity.  The Sacred Heart reminds us that to be a Christian is to love and care for all who are wounded and all with a broken or a hard heart.   Like the disciples, we are called to recognize Jesus by His wounds. Will he recognise us by our wounds? 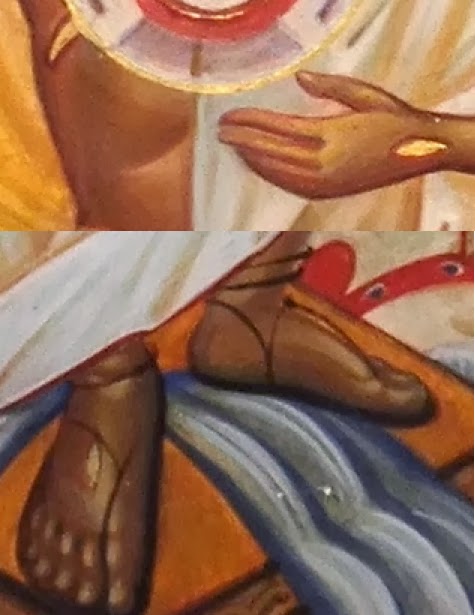 Hence, in the icon the five wounds are shown in glowing gold rather than bloody red.  As Christians we venerate the Glorious Wounds of the Risen Christ - for by them we are redeemed.  All an image can do is to remind us of this central doctrine of our faith.  Christ’s heart was opened to provide a doorway into the New Life.  This image was central to  Christians for hundreds of years past – it should also be a unifying image for the future. In the past the wounds of Jesus would have been seen as a divisive image- now, and in the future they should be seen as a symbols of our common faith, hope and love.

The message of the Five Wounds is that we must have a concern in this life for the wounded nature of our lives and those of others, for the wounds in the side of the Church - its disunity, for the wounds in society... When our hearts are moved by them, when we pray for them and give alms to help them, then in a minimal but real way we share in the suffering of the Wounded Christ' ( The Five Wounds of Jesus, p 9)


============
*An excellent book on this very topic of the Sacred Wounds amongst Evangelical and  Reformed Christians is  The Five Wounds of Jesus by Dr. David  H. Williams, Gracewing, 2004