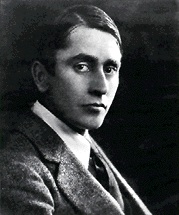 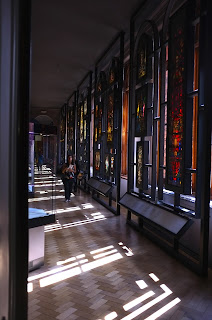 I wish I could say that I saw it in an Irish church, but no- it was in the Victoria and Albert (or V&A). I have to admit that I was not looking for it- as I have long ago given up finding an image of the Sacred Heart in an art gallery or museum - leastways in the UK.  I was aware of Clarke's work as a book illustrator, but wholly ignorant of his stained glass.

However, an excellent book by Lucy Costigan and Michael Cullen ( Strangest Genius: The Stained Glass of Harry Clarke ) has shown me what an exciting and important artist he is!    Indeed, he is generally recognised as one of the most influential stained glass artists of his generation.  Must look at some of his other Sacred Heart windows! 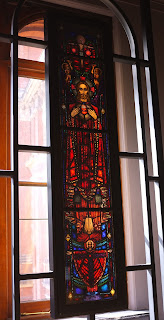 The window in the V&A was designed in 1918 and made in 1927.  The design was, apparently done as a preparatory work  for a commission from the Arch-Fraternity of the Sacred Heart  of a Vincentian church in Phibsborough in Dublin which was installed in 1919. This design was subsequently used by Clarke and his studio in other commissions.  Given his acknowledged pre-eminence there can be little doubt that the image must have been influential on other artists - so it may be that the design in the V&A has had a significant impact on how the Sacred Heart was represented in later decades?  See the V & A page here. 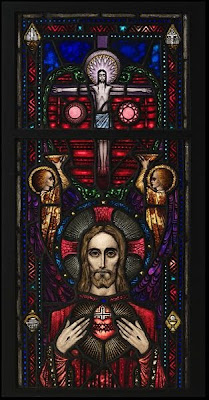 Unlike Bailey he did not actually study in Paris, but he did tour Europe to study stained glass.  Thus we see both the influence of symbolism and art -deco but also of medieval art and colour.  It is a very fine piece of work, but also an image which is rich in theological symbolism: this is not a sentimental kitsch Christ, but a powerful, prayerful and thought-provoking work of art.

At the top we see Christ crucified, and underneath him two angels collect His precious blood and water.  The 'cosmic' sense of the piece is strong as it uses the sun and moon and above dark blue heavens.  In the centre we see Christ showing us His Sacred Heart on fire and glowing with love for humanity. On either side are symbols of the Eucharist, water - it looks like the Ark of Noah , and a Chalice ( marked IHS)  with a host.  We also find other symbols, the Lamb of God, a pelican feeding her young  and loaves and fish. The two right at the top I really could not make out! 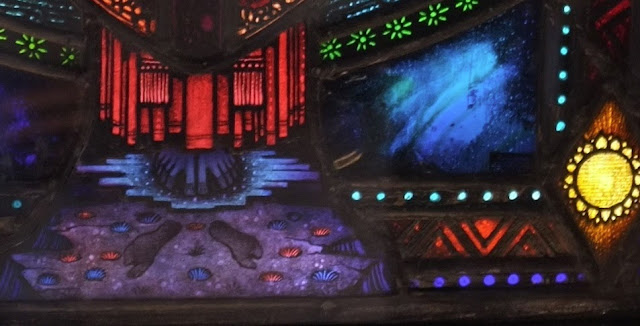 The lower part of the window (above)  is perhaps the most interesting. We see Christ ascending to the Father and as he does so he leaves His footprints on the earth below: footsteps that we are called to follow.

We also see the outstretched arms of the Risen Christ.  The heart is now more of a burst of fire or energy and all around there are spirals  which both evoke Celtic art, but also a sense of what Teilhard terms the 'cosmic Christ' uniting all things to himself. 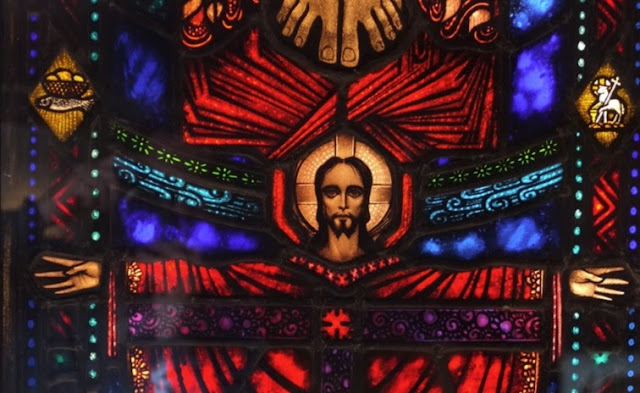 Thus what is so fascinating about the window is that it literally does provide us with three windows through which to understand the Sacred Heart.  At the top, we contemplate the 'Pierced One', whose sacrifice on the cross has redeemed the world.  In the middle we see the Sacred Heart as the most complete expression of the perfect and infinite love of God for humanity, and the Sacred Heart as the Eucharist.  And at the bottom we see the Cosmic Christ we find in St. Paul drawing all things to Himself!  Here we see express what Dante describes as the 'Love which moves the sun and the other stars'!
Posted by DWP at 14:03