One of the most important things I have learnt ( or I am learning) from reading an icon is how to read religious art in general.  And, in the case of the icon of the Sacred Heart which informs (and inspires) this blog I would say  that it has provided me with a window or lens through which to read other works of art.  The picture by Phillipe de Champaigne is a good case in point.  He was a prolific artist and his paintings – many of which are on religious themes are to be found all over the world.  There are a couple in the National Gallery in London, and in many other galleries in other European countries.

His picture of St. Augustine is actually in America (LACMA, Los Angeles County Museum of Art ) and is one of the most widely used images of the saint.  De Champaigne actually died in 1674, the year following the commencement of St Margaret Mary’s visions (1673).  During his lifetime (1602-1674) the devotion to the Sacred Heart had continued to grow as a private devotion.  It was, as we have noted elsewhere on this blog, subsequently adopted as a devotion by the Visantines, established by St. Jane Frances de Chantal and St Francis de Sales  in 1610.  St John Eudes established  the congregation of Jesus and Mary in 1643.  Thanks to his efforts the feast celebrating the hearts of Jesus and Mary was instituted and by 1670 the first feast of the Sacred Heart was celebrated in the Grand Seminary of Rennes and soon began to spread. 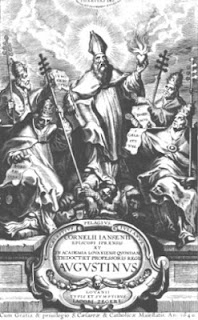 Not everyone was happy about the spread of the devotion to the Sacred Heart.  Above all, those who were most bitterly opposed to the Sacred Heart as it was developing in the period in which de Champaigne was active were the Jansenists.  READ HERE.  Jansenists were extremely hostile to the devotion.  By 1640 de Champaigne himself had become a Jansenist – around the same time as the publication of Cornelius Jansen’s  (the Catholic bishop of Ypres), infamous book, Augustinus seu doctrina Sancti Augustini de humanae naturae sanitate, aegritudine, medicina adversus Pelagianos et Massilianses - or simply the Augustinus. As the title indicates, the book set out to demonstrate that the Catholic church had to change its ways and acknowledge the importance of what St. Augustine had to say about (inter-alia):  Pelagianism, Original Sin and Divine Grace.

The image contained in the Augustinus (right) as published after the death of Jansen himself shows St Augustine - who Jansen believed to be the source and guide for a new reformed Church-  holding his flaming heart and looking upwards towards a quotation from Paul's letter to the Romans, 5.5: ' Dei diffusa est in cordibus nostris'. The full quotation is :' spes autem non confundit quia caritas Dei diffusa est in cordibus nostris per Spiritum Sanctum qui datus est nobis.'  Which may be translated as ' And hope confoundeth not: because the charity of God is poured forth in our hearts, by the Holy Spirit who is given to us.' 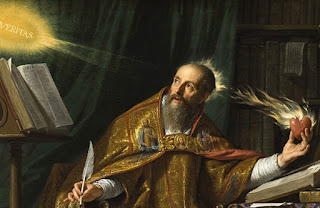 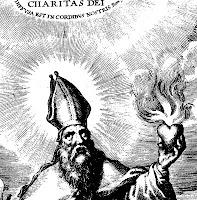 For the followers of Jansen, the devotion to the Sacred Heart was a demonstration writ large of what was  going wrong with the church.   When we look at the painting by de Champaigne and compare it to the image which appears in  Augustinus we can see how it is very  Jansenist image.  So in one sense this is an image which was painted – by a famous artist of the day – to represent the ‘anti-Sacred Heart’ position.  Here the heart is not being offered to God,  so much as is it being filled by the Holy Spirit.   So, my previous blog suggesting that it may be read as a ‘Sacred Heart’ image is to say the least ironic, and actually wrong.  As a Jansenist  the artist was seeking to lay claim to St. Augustine for the Jansenist cause and to use this image to advance or represent the Jansenist cause!

But what is striking about the Jansenist images of Augustine was how they brought out the 'heart' aspects of his spirituality.  This is clear when we compare the image of de Champaigne with  earlier portraits  by Botticelli, Lippi, Carpaccio and others. Here,  for example, we see Carpaccio's and Botticelli's depiction of him in his study surrounded by books and scientific instruments.  This is Augustine as humanist and scholar. The Jansenists, on the other hand really went for the mystical  'heart on fire' aspects of Augustine.  Indeed, the image has far more in common with the 'art work' later  associated with the Sacred Heart, than with the studious doctor of the Church to be found in earlier portraits such as that by Botticelli! You would think that the Jansenists would have opted for the more 'scholarly' approach to Augustine, but instead they go for the flaming heart Augustine! Which is perhaps a bit odd, given their dislike of the devotion to the Sacred Heart.

Who will hold fast the human heart so that it may stand and see how eternity, standing beyond past and future, speaks both past and future? Is my hand capable of this? Or can the hand of my mouth accomplish such a great thing through language?(Confessions, 11.11).


In the painting he holds a pen or quill and seeks to hold fast to his heart and translate the divine truth into language: the words the Jansenists believed were necessary to reform the church. The painting does not use the quote from St. Paul, but simply the word 'veritas' - truth shining above the Bible.  The Saint's heart is full of God's truth, and it is therefore to his writings, inspired by truth, to which the Church must look for guidance.  It is, to reference the quote from the Confessions(11.11), Augustine who has been able to hold fast to the human heart and to translate the truth into language!

Contrast this with Batoni.  Here we see the Jesuit response to the Jansenist heretical attacks on the devotion. Christ holds His heart and in doing so challenges the idea that only a limited number of people were predestined to be redeemed. Here God’s grace is being offered to all, and not just to the predestined elect.  Grace could be efficacious for all, and not for the select few.  We can ask for mercy and forgiveness and ask for God’s grace to flow into us and set us on fire.   The Sacred Heart invites us to love Him, to give Him our hearts as he gives His to us.  To Jansenists such as de Champaigne, these ideas were anathema and were – they (wrongly) believed – contrary to what St. Augustine taught.  For all its sentimentalism and kitsch the Batoni painting was a powerful statement of the Jesuit case against the narrow way of understanding salvation propounded by the Jansenists.  In the Sacred Heart each and every one of us is called and offered God’s love and mercy: salvation is in our hands, just like Christ’s heart is in his. We have it in our power to open our hearts to God’s love and give our heart – our complete and whole selves – to Him.  We can make amends and reparations for all our failures to love God and our neighbor!  The future is in our hands, and is not all pre-determined.  Jesus offers us HIS heart, and HE  holds out His hand and asks us for ours.  All of us, and not just the elect.  Thus, the Sacred Heart is indeed the summary of the Catholic faith, and a rebuke to the misguided Jansenism which informs the painting of St. Augustine.

However,  we are not constrained to read de Champaigne's painting from the distorted Jansenist perspective which its painter undoubtedly intended.  Indeed, we can rightly see St Augustine as helping to lay the deep theological foundations of our devotion to the Sacred Heart:  the love which is the Alpha and Omega of all creation.  Contrary to the Jansenist view that saw God's love and grace as for a select few, the Sacred Heart came to symbolize the universal love of God for all mankind. Hence in 1794 Pope Pius VI issued his Bull, Auctorem Fidei to assert that the devotion to the Sacred Heart was grounded in scripture and Catholic teaching -and that included the writings of Augustine-  and not some new invention. In this respect we must, therefore, understand Augustine as a saint of the Sacred Heart: someone who taught that God's love was universal and total.  As Teilhard observes:

under the influence of rare passions like those of Paul, Augustine  or Teresa (of Avila)  the theory and practice of total love have ever since been propagated. So, as a result of the two thousand years of mystical experience that supports us, the contact we can make with the personal centre of the universe has gained as much in manifest riches as our possible contact with the world's natural spheres after two thousand years of science. ( Human Energy, 159-60)