Humility and the heart of the Saviour 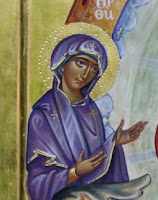 Of late I have been working on the problem of humility - as an important civic and epistemological virtue and how this relates to the theology of the idea of humility, especially in Acquinas.  And a while ago I was asked to read at Mass and to my surprise it was Saint Paul's letter to the Philipians  ( 2:6-11  ) where he draws our attention to the humility of Christ.  It seemed at that point many ideas began to flow into one another in a most productive way.  One result of this was to prompt me to reflect on the theme of humility in the icon.  This has been a topic which this blog has  touched upon, but it strikes me that it needs to be given more emphasis.  I think this is the result of allowing Theodore Baily's window to help me read the icon.  Both images ask us  to contemplate Jesus as 'meek and humble of heart' (  Matthew, 11:29).  We have to learn from him.  His heart is the great treasury of wisdom: that if we are to evolve as a person and as a species we must learn to be humble.  If His heart is the treasury of all knowledge and wisdom (scientiae and sapientia) then we must understand how important humility is for humanity.  Dom Theodore's window therefore invites us to consider the Benedictine tradition of humility as the most vital of virtues, whilst the icon gives us paragons of humility: the Blessed Virgin, and St John the Baptist on the left and right.  Whilst on the bottom of the icon we find Adam and St. Mary Magdalene in positions of humility before Christ Omega.

Humility was considered more of a vice by Aristotle, but Augustine and Acquinas regarded Humility as the first of the virtues, for without humility it was impossible to love God or ones neighbour.  We see their teaching expressed nicely in Dante's Purgatory, in which Pride is the first 'terrace'. Without learning humility it was impossible to overcome the other sins.  Pride  ( what Dante terms "love of self perverted to hatred and contempt for one's neighbour") was the deadliest of all sins: it was the great offence of Satan.  Although the Greeks did not acknowledge humility they did recognise that human beings could fall prey to 'hubris' - excessive love of the self and an over-confidence in your own abilities.  Pride is the source of so much human misery at an individual and collective level- hence Aquinas devoted a good deal of his writings showing why humility is spiritually and socially important.      And yet, despite this, humility has never been accorded the central place it deserves.  For Machiavelli, humility in a prince was a dangerous weakness and vice. However, the prince had to appear or seem to be humble - for the sake of appearances.  Humility was a useful form of deceit.  During the 'enlightenment'  humility was also regarded as more vice than virtue.  In Hume's  Enquiries (1777)  he argues that it is nothing more than a 'monkish' virtue  of little practical use outside a convent or monastery.  However. as we contemplate the humility of Christ, and how we must seek to learn from his meek and humble heart,  the icon  prompts us to realize  that the future of humanity is bound up with how we learn this chief lesson of the Sacred Heart.  Humility is a necessary epistemological virtue: that is, unless we are able to able to admit that we are wrong in what we thought was true, and unless we are willing to learn from our mistakes we are doomed to face our personal and collective nemesis.  Science cannot be hubristic: science can only progress by cultivating humility.  ( Indeed that is what the arch-atheist Russell argues in his history of philosophy!)  So controlling our pride is a virtue which is a pre-condition of rational behaviour. Humility is not just a 'monkish virtue', it is also a pre-condition for scientific progress.  Humility is also a pre-condition for creating and sustaining political and social order.  Humility, correctly understood, is about self-knowledge: understanding your limitations, and being aware of your strengths and weaknesses.  Humility, correctly understood, is about respecting other people and not assuming that you can live your life independent of them. Humility is a civic virtue which expresses itself in listening and toleration.  Without humility human beings can be foolish and dangerous to the common good.  And yes, humility is a theological virtue grounded in an appreciation of our call to love God and love our neighbour.   In all of this humility is not about being a floor mat. The great Saints who exemplify lives of humility were not weak or  passive pusillanimous people: quite the opposite.  The humility of saints shows itself as a powerful and vital force or energy which enabled them to do great things.  In short, to realise your potential as a rational and spiritual human being you must learn humility: and  humility is undoutedly the  hardest thing that humans have to learn. Hence we pray:

Jesus, meek and humble of heart, make my heart like unto Thine.
Posted by DWP at 09:30