Having travelled all the way to west Wales I found myself ( mentally at least) having to return to Paris once again!  For if I was to make sense of the stained glass window by Theodore Bailey, in Wales,  we have to wrestle with the French relationship to the devotion and to the image.   As a monk Dom Theodore was a member of a Benedictine  order which had itself played an important role in the history of the devotion.

Arriving in Paris in the early 1920s Dom Theodore would have experienced a high point in the history of the devotion: the great  Basilica had been completed in 1914 and was dedicated in 1919 ( the same year as the founding of  the Ateliers d'art sacré ). George  Desvallières and Maurice Denis's mission to renew and re-vitalize sacred art had obvious implications for the image of the Sacred Heart: the most prominent of all the ‘sulpician’ kitsch art which they deplored.  Dom Theodore was to be greatly influenced by his experience in Paris, but he was not to come back with the same kind of idea or image of  the Sacred Heart as that which he would have encountered in Paris. What we see is in many respects most unlike the work of his teachers. 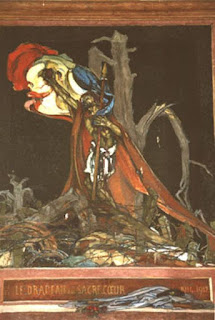 George Desvallières had, by the time the young man from Caldey came to Paris, executed a number of Sacred Heart pictures.  Two pictures in particular had acquired some notoriety and acclaim prior to Dom Theodore’s visit.   The first, painted in 1905 showed Christ suffering with and for humanity. Jesus is not on a cross, so much hanging, as it were in front of the Basilica which was being built at the time.   It is difficult to imagine a less sentimental representation of the Sacred Heart as Christ is ripping open his chest to expose his wounded heart.  Later in 1919 – after he had (like Henri Pinta) lost a son in the First World War  he painted another Sacred Heart which again radically departs from the traditional image and explores the same theme of the Sacred Heart as a symbol of Christ sharing in the sufferings of humanity: the’ Drapeau du Sacré-Coeur’, for the Church of Notre Dame de Verneuil.  Not much by way of sentiment here, but a powerful portrayal of a Christ who is wholly and completely sharing in the pain of humanity. 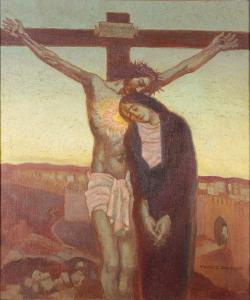 Maurice Denis had also completedseveral works on the Sacred  Heart.  These are very different to the approach taken by Desvallières, and seem to focus on the Sacred Heart as a kind of golden glow of divine love.   In this respect they are very much in keeping with the ideas we find in Teilhard, and which he believed was expressed in his Henri Pinta picture.  In his 1894 painting Sacre-Coeur Crucifi  (right) Maurice Denis depicts the Sacred Heart as a golden glow: a light illuminating the darkness.  Later, he produced various versions of the same  image of a crucified Christ with a golden glowing heart upon which rests the Blessed Virgin.  He worked on one of these designs during the time Dom Theodore was in Paris, for the art deco church by the architect Auguste Perret, Notre Dame du Raincy. An oil on canvas version is ( I think) at the Musee du Hieron at Paray le Monial. 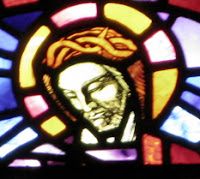 When we compare the images of the Sacred Heart by his teachers and that we find in the Holy Name in Pembrokeshire, we see no obvious points of similarity.    Indeed, if anything what we see in Dom Theodore’s window is a reaction against both the kitsch sentimentalism of the standard image but also a reaction against the kind of emphasis on suffering we find in Denis and Desvallières.  Dom Theodore’s Sacred Heart is a very much a monk's image: it is the Sacred Heart as a loving silence.  The Sacred Heart in this window above the tabernacle is a call to enter into the silence: it is a image which tells us that for the artist we have to be meek and humble of heart.  We have to be still and listen to the sound of the Heart of Christ: it is an image which is asking us to close our eyes and be silent.  In this was we can enter into the sacred heart of creation and be open to an encounter with God.   And I think this is what we see in this window: it is a window into the centrality of silence and humility in Benedictine spirituality.   If we desire to enter into the Sacred Heart we have to cultivate stillness and silence in our lives.  Thus although in Paris he encountered the Sacred Heart in terms of suffering and light, the experience of a monastic life led him to portray the devotion  to the Sacred Heart as a devotion to finding space for silence in our lives. This is the only way to understand our own heart and the heart of  God. Be still.  Be silent. Listen. A heart is beating at the centre of creation: it is the heart of Christ.  As a Benedictine Dom Theodore knew that silence is the path which leads to the deep mystery of the heart of the Saviour. To take up this path requires us to be wholly orientated towards the glowing love of God, like the sun flowers which always turn towards the sun, and ( fern-like) ever seeking to become humble of heart.

Well, such were my thoughts.