First Friday and the Sacred Heart of Geneva 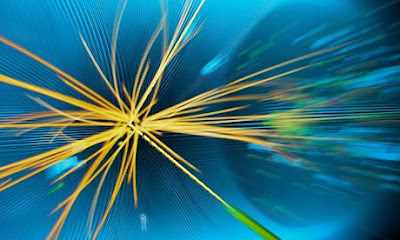 First Fridays are important days in the year for those who are devoted or attracted to the Sacred Heart. Today I reflected on the Sacred Heart in Geneva – no not the church in Rue du General-Dufor – but the one which has been in all the news this week, at CERN.  I have been fortunate in belonging to an institution which has had a long association with CERN and thus I was very much aware of the World Wide Web in its early days, and also the Hadron Collider project which has amazed the world with its (pretty certain) discovery of the Higgs Boson particle.  These two projects would have fascinated and excited Teilhard, and thus my mind kept thinking of the significance of what was announced this week.  I haven’t Googled ‘Higgs Boson particle jokes’, but I was told one years ago by a physicist trying to explain what it was all about: and I confess, mea cupla, that this joke kept coming into my head at mass!

A Higgs Boson particle visiting a parish one first Friday was spotted by the priest who was most upset.  ‘Get out of this church,’ he said, ‘I am not going to have a scientific hypothesis kneeling in a pew in this church.’  The particle was most upset. ‘The thing is, father, I am trying to complete my 9 first Fridays, and I only have one more to go..’ said the Higgs Boson.   But the priest would have none of it and insisted that it leave straight away.  As he left he turned and said: ‘ Ok father, but you know that if I go, you’ll have no mass.’


Higgs Boson is the particle that gives the universe mass. Without mass there would be no gravity and no force of attraction between all the stuff that composes creation.  It is the glue which holds all the universe together and stops everything moving around with the speed of light.  As I thought about the joke I wondered what Teilhard would have said.  First he would have laughed, because he enjoyed a joke and secondly he would have suggested that after mass I should re-read his essay on ‘ On looking at a Cyclotron’ written in 1953.  Teilhard saw love as the fundamental energy in the universe: God as the creator of all things is love and he envisages it as a kind of universal energy or force of attraction. God as the source of all love is therefore pulling us towards himself.  That love is the beginning of all things, the Alpha, and also the end of all things – the Omega.  When he saw a particle accelerator in America in the early 1950s he was excited and captivated by what it meant and its possibilities.  For him it was a window into the deep inner dynamics of the cosmos. So after mass I sat down and re-read his essay which records his feelings on looking at a cyclotron in Berkeley in 1953.

Whilst looking at the particle accelerator ( and the Hadron Collider in Geneva in the largest ever built)  Teilhard has a vision of the Sacred Heart of the universe: the divine centre of all things.  The divine centre which was both the beginning and end of the cosmos.  He says:

'Before my bewildered eyes the Berkeley cyclotron had  definitely vanished; and in its place my imagination saw the  entire noosphere, twisted back upon itself by the wind of  research, forming but one single vast cyclone, whose specific  effect was to produce, instead of and in place of nuclear energy,  psychic energy in a continually more reflective state: and that  is precisely the same as saying to produce the ultra-human.  Now, what was so remarkable was that confronted by this  gigantic reality which might have made my head reel, all I  experienced, on the contrary, was a feeling of peace and joy, a  fundamental peace and joy.  First, of peace: because precisely in virtue of its immensity  and in consequence of its security , the movement I saw came to me  as a reassurance for the terrified monad. The faster the whirl-pool the less danger there was that the grain of sand I represented might be lost in the universe. Contrary, then, to what existential writers have been dinning into our ears for the last twenty years, it is only a general view of evolution (and not an  ever more solitary introspection of the individual by the individual) that (as I experienced it once more in my own person) can save twentieth-century man from the anxious  questionings prompted by life. And of joy, too: for I saw then more clearly than ever  before that if we were to explain the presence in and around us  of a physical field sufficiently powerful to cause the totality of  the human mass to fold in on itself, we should have to do more than cite the collective pressure of untold numbers of elements  driven in the same direction by the need to survive. To create  the current that is to draw us, with increasing intensity and  probably for hundreds of centuries still to come, both towards  the above and the ahead, the repulsive (or negative) pole of a  death to be avoided must, by dynamic necessity, be matched  by a second, attractive (or positive) pole - the pole of a super- life to be attained: a pole capable of arousing and satisfying  ever more fully, with the passage of time, the two demands  characteristic of a reflective activity: the demand for irreversibility and the demand for total unity.  And it was thus that, the more I tried to extend into what lies  ahead, and to divine, the progress of the immense physico-psychic spiral in which I saw that I was involved by history, the more it seemed to me that what we still know by the too simple name of 'research’ became charged with, became tinted with, became warmed by, certain forces (faith, worship)  hitherto regarded as alien to science. For the more closely I looked at this research, the more I saw that it was forced, by an inner compulsion, ultimately to concentrate its efforts and its hopes in the direction of some divine centre'. In Activation of Energy, pp356-7

Like St Thomas Acquinas  Teilhard saw nothing revealed by science which undermined his belief in the existence of a ‘divine centre’.  The particle accelerator in Berkeley in 1953 only served to fuel his faith in God and in the future of man.   He did not see just a machine: he saw something of the power and energy which fills all things - love.  Higgs Boson shows us the glue which enables our universe to exist: the Sacred Heart shows us why it exists and where it is going.  The Hadron Collider at CERN is yet another way of seeing the Sacred Heart of matter: Christ in all things.