Divine Mercy Sunday : reflections on the Lenten and Easter journeys 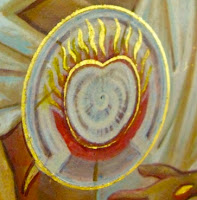 Divine Mercy Sunday is an appropriate day to reflect on the Lenten and Easter journey  which - for me -  was focused on the life and teaching of St. David.   More than anything this Lent  made me think of water - the element most closely associated with the saint.   As Lent progressed I was increasingly pulled towards reflecting on the heart of Christ lanced with a spear and the blood and water flowing out of Christ  into the creation.  But it was only on Good Friday that the significance of the 'Heart of Jesus, pierced with a lance' came home to me - for in truth it had never really got through to me before this.  The pierced heart  was an aspect of the icon which I was aware of, but had not, until that moment during the reading of the Passion according to St, John in the Good Friday service, commanded my attention, and it was a 'light bulb'  experience.   I got it.

When they came to Jesus they found he was already dead, and so instead of breaking his legs one of the soldiers pierced his side with a lance; and immediately there came out blood and water.  This is the evidence of one who saw it- trustworthy evidence, and he knows he speaks the truth...( John 19: 23-37)

This flow of blood and water was immensely important to the evolution of the devotion to the Sacred Heart.   At today's Mass we are reminded of the centrality of this event in the reading from John's Gospel  (20:19-31) where Jesus invites Thomas to put his hand into the wound in his side. And, in the first letter of St. John we again are reminded that Jesus 'came by water and blood, not with water only, but with water and blood'(5: 1-6.)

The image of Jesus associated with Saint Faustina explicitly urges to focus on the blood and water which flows from the heart of Christ.  Blessed John Paul - a great advocate of both the Sacred Heart and the Divine Mercy  had this to say about the the 'Heart of Jesus pierced with a lance'  in one of his Angelus meditations on the Litany on the Sacred Heart. (30th July 1989) 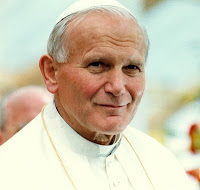 Throughout the centuries, few pages of the gospel have attracted more attention from mystics, spiritual  writers and theologians  than the passage from St. John's Gospel which describes Christ's glorious death and piercing of his side...In the pierced heart we contemplate the filial obedience  of Jesus to the Father..that is to the ultimate sacrifice of himself.   The pierced heart is the sign of the totality of this love in the vertical and horizontal directions, like two arms of the cross..  The pierced heart is also the symbol of the new life  given to man through the Spirit and the sacraments....[ St. John] intends to deepen the significance of the salvific event and to explain it through the symbol.. therefore he regards the episode of the piercing  with the lance as profoundly significant.  Just as from the rock struck  by Moses a stream of water gushed forth in the desert, so from Christ's side,  pierced by the lance, there came forth a torrent of water to quench the thirst of the People of God.  This torrent is the gift of the Spirit which nourishes divine life in us. ..  from the pierced heart of Christ the Church is born.  Just as  from the sleeping Adam his wife Eve was taken, so ..from the  wounded side of the Saviour as he slept in death on the cross, the Church , his Spouse, was taken.   In fact, she is formed  from the water and blood - Baptism and Eucharist - which flow from the pierced heart.. The Evangelist notes that besides the cross was Mary, the Mother  of Jesus.  She saw the wounded heart from which flowed blood and water, blood taken from her blood and she understood that her Son's blood  had been taken for our salvation.  Then she  understood fully the significance the words which her Son had spoken a short time previously: 'Woman this is your son': the Church which flowed from the wounded heart had been entrusted to her motherly care.   Let us ask Mary to lead us to draw  more and more abundantly from the streams of grace flowing from Christ's wounded heart.
John Paul II, Litany of the Heart of Jesus, Prayer and Service, October - December 1990, N. 4, pp 343-4


Thus my Lenten and Easter journey accompanied by St David brought me to a new and deeper appreciation of the image of the Sacred Heart contained in the icon.  We can mediate on the wound inflicted by the lance as a golden shining (cosmic)symbol of the new life in Christ.  We can reflect on the Church being born like Eve from the first Adam (on the left) and contemplate the stream of living water which flows from Christ.  And we can turn to Mary  and 'ask us to lead us to draw more and more abundantly from those streams of grace flowing from Christ's wounded  heart.'
Posted by DWP at 12:21